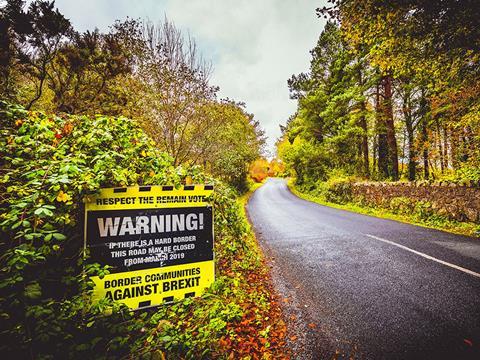 Agri-food accounts for a fifth of NI economy, and extra costs and delays could wipe out many food and drink SMEs

The food and drink industry is at the heart of the no-deal Brexit problem. No other industry relies on just-in-time delivery in quite the same way: while there’s always a cost associated with delays, automotive parts (for example) don’t go off. And the tariffs on agri-foods are typically much higher than on other goods. In both directions.

And at the epicentre of the no-deal Brexit problem, thanks to the backstop impasse, is the Northern Ireland food and drink industry. Over the past 20 years, food and drink businesses on both sides of the Irish border have enjoyed peace, equality of standards, free and frictionless trade - and growing prosperity.

While focusing on the food and drink industry in Northern Ireland might seem petty against the threat to the Good Friday Agreement, the potential break-up of the UK, or political ideals and principles, this is not small potatoes: agri-food accounts for a fifth of the NI economy, and extra costs and delays will wipe out many food and drink SMEs, experts warn.

It could be equally catastrophic for the Irish agri-food industry, which is not only highly integrated with NI agri-food but hugely dependent on the UK as an export market. But the Irish government (or the EU) might bail out Irish businesses and farmers, whereas the situation north of that controversial border is far less certain. It’s a particular problem for NI Food because while, as we revealed last week, efforts are being made to cover suppliers against losses incurred through exporting to mainland Europe, it has evolved almost symbiotically with Ireland, making it that much more difficult to unpick losses.

This week, while Defra secretary Michael Gove met with supermarket leaders, the UK government was simultaneously inundating Irish and NI trade bodies with requests for info and meetings as it scrambles to find a solution. This industry is arguably the best place to find a solution given that agri-food accounts for half the goods crossing the border. In this issue we’ve examined a couple of possible solutions the trade has developed. But finding a solution will also require politicians (and the EU) to stop playing politics - and work together seriously to find a way forward.