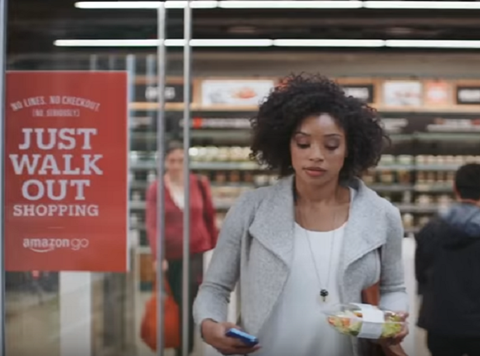 You have to respect Amazon. What a brand! If Tesco or Sainsbury’s or even Ocado came up with a lavish video for a grocery store that hasn’t even been built - and promised to change retailing forever - investors and journalists would question their sanity.

But almost everyone has gone weak at the knees over Amazon Go, crowning its wholly unproven tech-driven reverse into retail as yet another disruptive stroke of genius. The Wall Street Journal claims it wants to open 2,000 Amazon Go stores, prompting even Amazon - which must be loving its total domination of the retail conversation - to deny that one.

One reason for the hysteria Stateside is that grocery stores there are quite old-fashioned. Self-service tills are still very rare. Indeed Tesco’s introduction of them in Fresh & Easy was one factor blamed for its failure. Too impersonal, said shoppers.

It’s also significant that, after introducing a c-store in Northampton with no checkout operators, Tesco hasn’t rolled the concept out. Self-service is great. But you have to get the balance right, as Asda has recently learned in ripping out so many of its counters, or the whole experience becomes soulless.

Another problem is security. Amazon is using all sorts of unspecified kit (RFID tagging, driverless car technology and - by the looks of it - hotel room fridge notification systems) to make sure you pay up.

But it’s well known that self-service checkouts increase shrinkage. A report this year from the Department of Criminology found lost revenue rose 122% and even normally honest shoppers were encouraged to commit theft, either because they forgot to scan items, got confused, or were so frustrated - all those unexpected items in the bagging area - they felt justified in not paying. Plus: it’s so easy.

Sure, Amazon’s technology will make it a little harder. But people are clever too. And however hard they make it, the total absence of humans - apart from shelf stackers, of course (or will they be filled by drones?) - will make Amazon Go stores nothing more than giant vending machines. You may use them out of necessity. But it wouldn’t be much fun.