Kevin Hawkins' predictions for 2017: things will get nasty 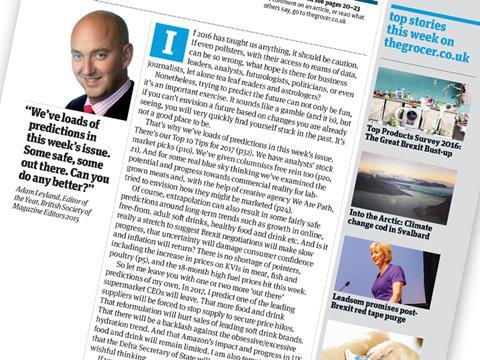 Sir, “You can never plan the future by the past,” said Edmund Burke. In response to Adam Leyland’s predictions last week, while some long-established trends such as the growth of online shopping and competitive discounting will doubtless continue, what do I predict will make our revered CEOs kick their teddies round the office this year?

First, the Germans aren’t running out of steam. Despite some recent slackening in their sales growth rates, market conditions will increasingly play to their low price/high quality offer as the year goes on. At the same time their store-opening programmes will start to kick in. Don’t get too excited about Tesco and Morrisons’ Christmas revival - they both still have much to do - while Sainsbury’s looks vulnerable.

Second, the market will get really nasty. A big minority of consumers are already expecting a hard time financially Why? Because retail food inflation, having been dormant for the past few years, will gradually become a reality - especially if hard Brexit takes hold and sterling hits the deck. Yes, there will certainly be more refusals to supply and more lobbying for Ms Tacon to cast her protective arm around farmers and growers, in neither case to any great effect.

Third, given we have had 15 years of largely ineffective propaganda for healthier eating supported by NPD, any idea that 2017 will see some kind of transformation in our habits seems highly improbable. If so we can probably expect more ministerial “initiatives”. They should read Edmund Burke.