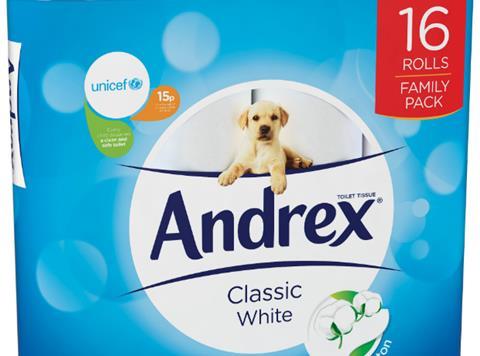 Andrex is continuing its partnership with Unicef with a new on-pack promotion to help tackle the problem of substandard sanitation in Angola.

Special packs of the brand’s toilet tissue will donate money to the Unicef Community-Led Total Sanitation programme, which provides education and resources to improve sanitation in Angolan communities.

Andrex aims to raise a minimum of £100,000, which will help to educate 60,000 families about sanitation and aid them in developing safe toilets for their communities.

More than seven out of 10 people living in rural areas of Angola do not have a clean and safe toilet to use [Progress on sanitation and drinking water – 2015 update and MDG assessment, Unicef and WHO, 2015]. One child in five does not survive to age five [Unicef: State of the World’s Children 2015: Executive Summary], and approximately one quarter of child deaths in Angola are caused by diarrhoeal diseases [Unicef Situation Analysis: Children and Women in Angola].

“Every child deserves a safe and clean toilet. Lack of basic sanitation affects people’s dignity and escalates the spread of life-threatening diseases that can be fatal to children and their families,” said Tom Berry, head of sustainability for EMEA at Andrex manufacturer Kimberly-Clark.

The Andrex-Unicef partnership launched in 2014 with a similar on-pack promotion.

“Throughout the three-year partnership, Andrex and Unicef have raised £600,000 and affected more than 180,000 lives in Angola,” added Berry.