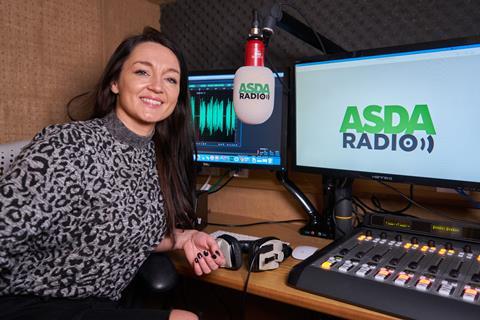 Asda has relaunched its in-store radio station in a tie-up with media company Mood Media.

The retailer’s chief customer officer Andy Murray said he hoped the “reinvigorated” station would appeal more to colleagues and shoppers.

The station, which launches nationally this week, will be heard across more than 600 stores nationwide, playing two pre-recorded shows daily, from 10am to 2pm and 3pm until 6pm.

The new service will also include an overnight slot hosted by Capital Liverpool’s Drivetime Show presenter Graeme Smith, aimed at keeping staff entertained throughout the night.

The new station will include Friday ‘takeovers’ by a different branch each week, including requests, shout-outs and ‘rollback’ hours.

“We are so excited to be working with one of the UK’s biggest and most innovative supermarket brands, across so many locations and reaching huge numbers of consumers,” said Paul Hillyer, head of creative UK at Mood Media, which has previously worked on in-store radio at the Co-op.

“As someone who has spent years working on breakfast shows in commercial radio, it’s going to be a delight hosting a show at a sensible hour, and even better, when it’s for one of my favourite UK brands and friendliest supermarkets,” said Amy Voce, host of the afternoon slot. “I’m loving the variety of songs we’re playing and hearing from the staff and customers, so hope they love it too.”

Asda’s Murray added: “We’ve completely reinvigorated Asda Radio with Mood. It’s a modern, relevant national radio station that delivers content that not only excites and inspires our colleagues, it also creates better engagement with our customers.” “The clever use of targeted playlists, colleague shout-outs and inspiration and meal ideas coming from well-known DJs means we have really enhanced the in-store experience.”