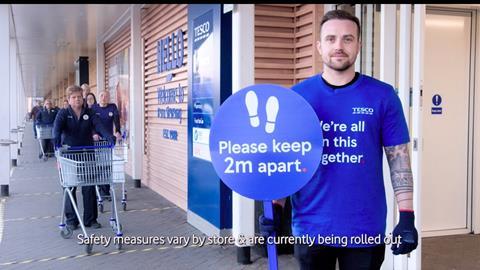 Coronavirus information ads: who did it best?

Supermarkets haven’t just fed us during the pandemic – they’ve also scrambled to produce ads reassuring the public. So how do their efforts compare?

NG: Tesco has launched instructional content which feels akin to an airline safety video – but in a world where there is so much confusion and lack of absolute clarity, both in the delivery of the messaging and who is authoring, Tesco has worked to keep it simple and to the point. Tesco has called on its colleagues to be the delivery mechanism, shunning any humour (just look at the faces in the queue outside), for simple no-nonsense guidelines, which should land the key messages well. In attempting to engrain behaviour change or adherence to their rules, Tesco could potentially think about a design language they could repeatedly use and reinforce beyond their blue and white.

RM: You wouldn’t want to watch it more than a few times, but this is probably the best of the ‘what you need to do’ ads. Properly filmed, with real employees who mostly deliver their lines well, it suggests Tesco stores are under control and safe places to shop. The explanation about what is happening in store and why is concise and clear. Even the usually annoying ‘every little helps’ line doesn’t seem out of place.

JB: A slideshow presentation? That’s it? Oh, it’s worse. I literally kept hitting the speaker function thinking my Mac had given up. But it is, in fact, also a silent slideshow presentation. Would a voiceover have killed you, Sainsbury’s? I’ve presented a few PowerPoints in my time and I tend to find talking helps. The small budget Sainsbury’s did throw at this seems to have gone on second-rate animations: a door, a queue, a clock, divider glass. This isn’t an ad, it’s a draft memo put on YouTube by mistake.

NG: Sainsbury’s has taken the approach of stripping back their idea delivering simple white and orange instructions on how they are helping feed the nation. Whilst some retailers have looked to inject more emotion and speak more from the perspective of their brand, it is an approach that can be atomised into each message, consumed on any device, sound on or off.

RM: Limiting this to graphics and basic animation makes this feel peculiarly soulless, just at a time when human engagement is probably more important than ever. This could easily be a list of instructions posted at the store front by a less-than-empathetic manager. The clunky end line “thank you for helping us work to feed the nation” is a bit odd too – suggesting that customers are getting in the way of more important things.

JB: A classic CEO piece: calm and heartfelt in a serious situation. Although he’s trying not to come over too statesman-like, it does feel overly worthy. The failing here is that the voiceover is – or looks like it is – set to standard Asda VT. So when he talks about being two metres apart, people in the background clearly aren’t. And when he talks about limiting shopper numbers, we see a busy Asda store. Maybe it’s subconscious – maybe big retailers can’t not show busy supermarkets. But on balance it’s a solid effort: the message is clear despite jarring with the VT.

NG: Asda, a brand that has in the past used the warmth and ‘one of us’ positive associations of its colleagues as an advertising mechanic, has turned to their president and CEO to deliver essential guidance for safer shopping. The ad works well, using the genuine delivery from Roger Burnley to make shoppers feel this is a reciprocal relationship between Asda’s CEO and you, where all parties are helped. His choice of language of ‘kindness’ is different to other brands which can feel more matter of fact. I hope this approach of togetherness from top to bottom, rather than being prescriptive, works for the brand.

RM: Roger does all right with a limited script – basically delivering the same information as everyone else but with an added appeal for kindness to staff – but would have benefited from some performance coaching. Slow it down, know when to pause, add the right inflections, and what feels at the moment to be earnest and a little cold could have been much more engaging. Nevertheless, a good choice to put the CEO front and centre.

JB: The tone of this is just wrong. Morrisons has done a lot right throughout the crisis, but this ad feels very ‘look at us’. Granted this is more a CSR piece, it’s not about cleaning shelves and drawing two-metre lines, but the verbiage is agenda-laden and clumsy: “As a British food maker, our own manufacturing sites are working for longer.” What? How do these connect? What does A have to do with B? At best it’s jarring. At worst it’s cynical point-scoring. This isn’t the time to break an arm patting ourselves on the back, and it’s a shame, because much of Morrisons’ work throughout the coronavirus crisis has been stellar.

NG: Part of the strength of Morrisons lies in the feeling that shoppers are buying into a company rather than an overtly marketed brand. This feeling of a company using its muscle to systematically help those in need is brought through in their ad. The language of ‘promised to play our full part’ and end lines of ‘it’s more than our job’ and ‘feeding the nation’ gives the work the feeling of societal obligation in a time of real need which I suspect will be strongly appealing to its customers.

RM: Morrisons’ eschews all that two-metres-apart stuff to tell us instead how incredibly generous it is being in giving £10m of (waste?) food to food banks and charities over the next four months. It then suggests we can make food bank donations too, which is laudable, but the emphasis is the wrong way round. Had it set out the need for food bank donations, told us how we could help and then said what it is doing too, the whole thing would have worked much better. Meanwhile, I presume someone has told them that you can read ‘feeding the nation – it’s more than our job’ in more than one way?

These times feel unusual, but we are here for you. pic.twitter.com/HD6jMy0oeV

JB: Like Tesco – but with more visual swagger – this is simple, reassuring and hits the right tone. It touches on supply chains, customer needs, frontline heroes and, very refreshingly, the fact that everyone’s improvising a bit here. Aldi’s candid line ‘we’re trying our best…’ shows a vulnerability that’s utterly relatable to all of us right now. OK, Kevin the Carrot has the final word and that might be perceived as a bit crude. But laughter and escapism are in short supply right now. I’m not going to renounce some cheerful normality in an abnormal world.

NG: Different brands are starting their approach to helping people from very different positions. Some are looking at this as a time of national social need, others using their media to deliver simple instructions. Aldi has taken the approach of trying to make life and shopping feel as normal as possible in these unusual times. Their tone is strongly reassuring, showing plentiful shelves, orderly well-presented stores, paired with a voiceover that tells us the brand is trying its best to make it business as usual. There is even a cameo from Kevin the Carrot to lighten the mood and give us a nod to their endearing Christmas work.

RM: The aren’t-we-doing-well smugness is toned down a bit by the ‘business as usual’ stance, which is refreshing, though the voiceover is cheesily melodramatic. While some may agree with me that the only thing that could make Covid-19 worse is the reappearance of Kevin the Carrot, at least there is a little spark of well-judged humour here that, oddly, doesn’t feel out of place. The full shelves message comes across well too.

JB: Crushed it. At over two minutes, I was prepared to write this one off as too long. But this is a winner. M&S is the only one of the pile who intersperses (very positive) crisis messaging with reassurance from all corners of its ecosystem. Beyond in-store safety measures, I for one was glad to see what M&S is doing in the supply chain and in the community, for heroes and the vulnerable, and how it’s virtually going above and beyond to educate, entertain and gee up the masses. Top marks too for using real people and their iPhones (other smartphones are available…).

NG: Rather than follow the straightforward and keep it simple approach, M&S has worked hard to inject a sense that their entire operation is being mobilised to help their family of customers during this trying time. The ad is an anthemic end-to-end demonstration from farmers to deliveries to stacking shelves, cleaning, cooks, fitness and celebs, which all works to make viewers feel they have an M&S safety net to keep their lives and spirits going. The shift from the famous ‘This is not just…’ executions to how customers apply M&S in their daily lives is echoed in this work which is deliberately shot on mobile, to draw the viewers in to the real performances of the colleagues and celebs who are here for us now.

RM: This all feels a little too self-congratulatory. Yes, we know you’re working hard and doing a great job under enormous pressure right across the supply chain, but now is not the time to expect us to cheer you for it. Tell us how well you did when the worst is over. The impression of smugness is only enhanced by the presence of a lacklustre collection of minor celebs. If Covid-19 has taught us one thing, it’s that celebrities, beamed in from their lovely homes, have very little to add to the world’s wellbeing.

JB: And now we have a classic government ad – desperately trying to do it right, but just missing the mark. Let’s show gig economy deliveries and drivers and farmers and workers and… I do think the story and the gratitude are genuine, but government ads often come off as cheesy and paint-by-numbers. The soundtrack, the slow-mo, the smiles, the diversity. I get why it is what it is, but that doesn’t mean I don’t bristle.

NG: This captures the wide range of roles from more obvious farmers, in-store bakers, stacking and serving to the food delivery cyclists who are often left off the list, or viewed as less official or valid in their roles. This is great to see. Times are pressured and timelines short, but this work may have been more powerful if the nature of gratitude and how to express it had been considered for longer. There are ways of saying thank you, possibly recognising the risks they face in staying in their jobs, or their homes and families they are not tending to whilst they keep things running for us, or making it feel personal from the author, which could have given greater depth to the messaging.

RM: A third-party thank you to the food industry works much better than retailers self-congratulating. This is a nicely made compilation of other people’s footage, and while it’s easy to be cynical, the presentation of a simple ‘thank you’ is actually quite effective. There’s a public health/shopping behaviour message at the end to keep us on our toes. Oddly, this is the only ad that mentions coronavirus.