Is Aldi rattled by its rivals or just setting the record straight? 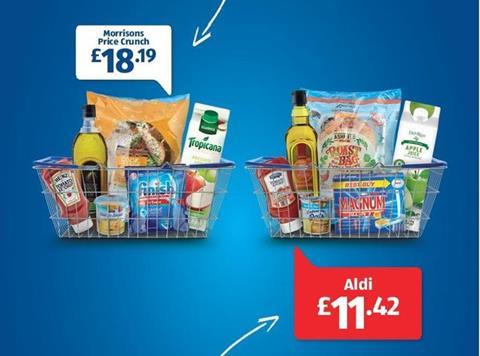 Is Aldi feeling the heat? That’s the question being asked following the ad campaign released by the discounter last Friday. Mocking the Morrisons’ Price Crunch initiative, analysts have claimed the “venom”-spiked ad backfired because it was “misleading” to compare the price of a basket of brands purchased at Morrisons with the price of own-label products at Aldi.

Speaking exclusively to The Grocer on Friday, Aldi CEO Matthew Barnes defended the ad. “Across the board there are several more examples,” he said. “And we do sell brands, they are just exclusive to us. We will hold up our products against any brands in terms of quality. So we believe it is fair.”

But a spokesman for Morrisons hit back: “No one will be fooled by the way they have picked a handful of premium branded products such as Tropicana and compared them to their own-label products such as ‘Del Rivo’.”

And, in a six-page takedown released the following Monday, senior analyst at Bernstein Bruno Monteyne pulled Aldi’s ad to pieces before launching a wider attack on the discounter.

“That Aldi is cheaper than Morrisons isn’t disputed, but why the price leader needs to use misleading data in a disingenuous claim is revealing,” he wrote. “This is the fourth sign in a series of strains appearing in the ‘discounters will-rule-forever’ story: slowing growth, a sharp decline in Aldi’s profitability, a large reduction in Aldi’s range and misleading advertisements.”

He also pointed out that none of the products Aldi had selected for Morrisons’ basket were included in Morrisons’ Price Crunch campaign, and claimed if Aldi had compared prices with Price Crunch products, the price differential would be “zero”. He also said Aldi has started to match Morrisons on price, rather than undercut it.

And he claimed Aldi’s margin had fallen from 5.2% in 2013 to a “likely” 3% by the end of 2014 while highlighting Aldi’s slowing sales, as reported by Kantar Worldpanel, which, at 13.7%, are “around a third as fast as April 2014 when growth was 36%”. He concluded that “not undercutting prices” and “destocking branded items” were strategic encouraging shifts for Aldi’s rivals.

Monteyne wasn’t the only analyst critical of Aldi. Clive Black at Shore Capital said Aldi “appears to be rattled” by its rivals - “most notably” Lidl, but also Tesco and Morrisons, which he believes have “identified more clearly where Aldi and Lidl have been most effective with British shoppers (fresh & chilled food) and they are starting to necessarily address price differentials”.

And HSBC analyst David McCarthy said he thought Aldi had suffered a “disappointing Christmas given its high media spend” (the discounter has not revealed any official figures). “Now it is cutting prices again and is supporting this with a major ad campaign. We would not be surprised to see the majors increase the pressure on the discounters by moving more EDLP. Discounters are beatable.”

But Barnes argued the motivation behind Aldi’s campaign was not because he was worried about the price gap closing but to “set the record straight”.

“It was the right time to cut through a lot of the baseless claims that are being made suggesting the price gap is being closed,” he said. “As the pressure is mounting on the competition, their rhetoric is being dialled up to convince their customers that the price gap is closing when it simply isn’t.”

Aldi claimed the price gap between it and Morrisons was “up to 38%” but this week’s Grocer 33 mystery shopping survey, which features Aldi as a guest retailer, suggests it’s tighter. Aldi was comfortably the cheapest supermarket of the six visited this week. The shopping basket of 33 items cost £41.17. The same basket cost £48 at Morrisons, which was in second place. So Aldi was 14% cheaper. But the last time Aldi was featured in The Grocer 33 was on 2 July 2015 it was 18% cheaper than Morrisons. And the time before that was almost 12 months ago, on 13 March, when Aldi was 22% cheaper. So using the Grocer 33 as a barometer, Morrisons appears to be steadily closing the gap on Aldi, rather than Aldi pulling away.

Though an average reduction from 24% in March 2015 to 22% cheaper in February 2016 still represents a significant price differential, the price gap as measured by the Grocer 33 is clearly contracting rather than widening.

Aldi disagrees, producing Kantar Worldpanel data that suggested the opposite: in January 2015 the average item at Aldi was 26% cheaper compared with the average price at eight rivals, but for the 12 weeks to 3 January it was 29% cheaper.

Either way, Aldi won’t ever be caught, says former Aldi manager and retail expert Thomas Roeb. “Aldi is in it for the long haul,” he says. “The others can’t go as far down on price because they can’t hold their breath for that long. The British supermarkets are public, which creates more pressure to retain profitability. You have to maintain your average margin because if you can’t, the Stock Exchange has a problem.”

And Barnes too insists Aldi remains comfortable. “There have been stronger attempts by competitors to reduce the price gap but we won’t let that happen,” he told The Grocer. “Our private ownership and efficient business model enable us to take a unique position [based on] a long-term strategy. We can keep going. And we will do whatever it takes.”