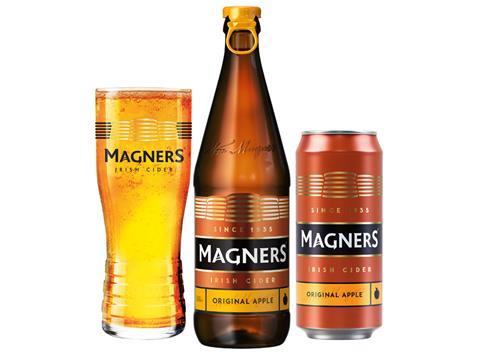 C&C Group is hoping to rejuvenate the apple cider category with a Magners Original makeover supported by a multimillion-pound push.

The new look will be rolled out across all cans and bottles from this week, featuring “less fussy and more striking” packs alongside a bottle ‘rip top’ closure to negate the need for an opener. It would make Magners the first major cider maker to introduce the convenient opening format, the brand told The Grocer.

The rip tops would support impulse purchases across the “growing convenience channel” and, together with the updated packaging, modernise the brand and align it with its target audience, said brand director Andy Cross, adding research had shown young adults found the apple cider category “boring”.

The research had also revealed consumers were suffering from “flavour fatigue”, said Cross. “With so much choice, but little resemblance to cider, consumers appear to be tiring of flavoured ciders in the same way they did with alcopops.”

The multimillion-pound campaign comprises a TV push from June; outdoor and radio advertising from this month together with heavyweight experiential, PR and social media activity - all based around a new “Hold True” tagline designed to encourage people to “stay true to themselves in a world full of fads and gimmicks”, said Cross.

“Magners Original is still loved by consumers but they have been enticed into new brands and flavours in recent years - this campaign is about reminding them Magners is still the original.”