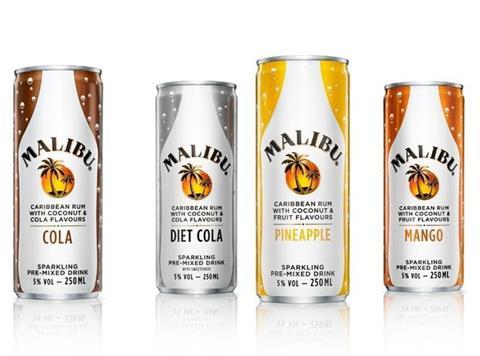 Pernod Ricard has refreshed the look of its Malibu premix cans, and added a Diet Cola flavour to the range.

Rolling out now, the 250ml cans (rsp: £1.99) feature a design that incorporates the shape of Malibu’s white bottle, with the name of the flavour in larger letters. The four flavours offered are now Cola, Diet Cola, Pineapple and Mango.

“We have enjoyed huge success with our pre-mixed range since we first launched in 2011,” explains Adam Boita, head of marketing at Pernod Ricard UK. “And it’s really important that we continue to innovate and excite our audience, particularly in a category where there is such great scope for further growth.

“We believe the eye-catching new makeover across our range, coupled with our first ever diet variant, will help us to do just that.”