McCain teams up with Primark on 'chips' jumpers 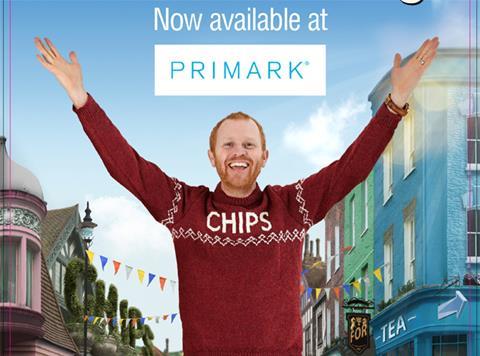 Chips fans will soon be able to show their love for the food as frozen potato specialist McCain teams up with clothing chain Primark.

From next week, shoppers will be able to buy a copy of the ‘chips’ woolly jumper that appears in McCain’s current TV ad campaign. The jumper will be available for four weeks from the 45 top-performing Primark stores, priced £12.

The retail launch, which will be backed with a £650,000 push including outdoor and national press ads, follows a Facebook competition giving consumers the chance to win one of 50 chips jumpers.

Describing the move as a “landmark” partnership, McCain said the launch was part of its celebrations for Chip Week, which runs from 17 to 23 February.

“By taking McCain beyond the freezer we’re making it highly visible and enabling consumers to engage with the brand in a different way,” said McCain Foods marketing director Mark Hodge.