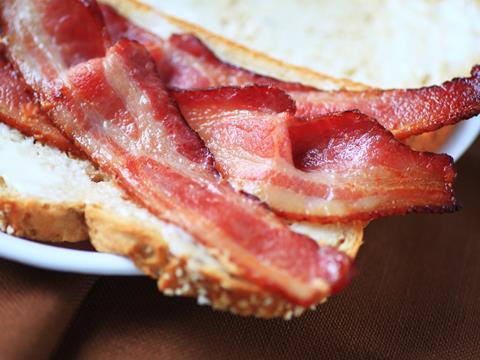 British bacon is losing its taste with shoppers

Supermarkets are selling more imported bacon despite predictions the weakness of sterling would boost British.

British bacon facings fell 5% between September and November 2016 in 10 major retailers, according to the latest AHDB Porkwatch survey, published this week. They were down 2% year on year, accounting for 46% of the rashers on shelves.

Almost all the mults increased the amount of imported bacon on shelves over the period, with the exception of M&S and Waitrose, which remained 100% British on bacon.

The percentage of British pork, ham and sausages on shelves also fell between September and November, the AHDB survey found, and was lower than during the same period last year.

“While we have seen a growth in exports since the Brexit vote, we haven’t seen a drop in imports and in some areas we have even seen them increase,” said AHDB Pork strategy director Mick Sloyan. “This reflects where the price points are in the bacon market, which has faced some difficulties in recent months.”

The UK was the only major back bacon market globally, so foreign suppliers would have little option but to remain price competitive despite currency fluctuations, Sloyan added.

And while the UK pig price dropped below the EU average last summer, it has subsequently risen again - making UK pork around 20p/kilo more expensive than EU pork despite the weakness of the pound.

The shift back to more imported bacon also reflected a tightening in the availability of British pork, according to a Danish industry executive.