We’re at peak meat. Which supermarket will bite the bullet and pledge to sell less? 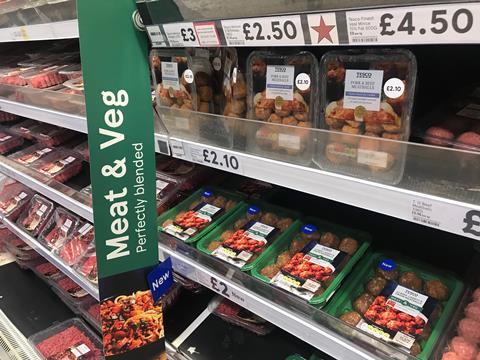 This summer, one headline encapsulated the enormity of the climate and nature crisis: the Amazon rainforest is now emitting more carbon dioxide than it absorbs. By slashing and burning it relentlessly, Big meat is taking the world’s largest tropical forest – vital to all of our survival – to the brink.

UK food retailers have known for decades that they share some of the responsibility. In 2010, campaigning by Greenpeace led to members of the Consumer Goods Forum, including Tesco, Sainsbury’s and M&S, signing ‘zero deforestation by 2020’ commitments, but every single retailer has failed. While shareholders haven’t yet felt the ripples from these broken promises, the world’s forests are going up in smoke.

Fanning these flames is the Bolsonaro government in Brazil, hellbent on pushing through bills to open up vast swathes of the Amazon to industrial agriculture, bulldoze environmental protections and abolish indigenous peoples’ rights. As communities face violence and land invasions, Tesco, Iceland, Sainsbury’s and others rushed in with warm words, all pledging to “reconsider support and use of the Brazilian agricultural commodity supply chain” if these bills became law. It is never now, always later. But supermarkets are already complicit in the alarming upward curve of deforestation and the disastrous consequences unfolding for the climate, nature, people and wildlife.

All major UK supermarkets sell industrial meat fed on soya. One billion chickens are slaughtered every year in the UK, and their soya feed is linked to burned and deforested land in the world’s most biodiverse savannah, the Brazilian cerrado – home to species like the jaguar, maned wolf and giant anteater.

In an effort to distance themselves from deforestation and placate concerned customers, supermarkets are quick to say they no longer buy Brazilian beef, which has come under particular fire for its impact on the Amazon, and have plans to buy soya ‘only from deforestation-free areas’ by 2025. The former may be true but the latter is greenwash – these areas don’t exist and talks to establish them collapsed in 2019.

The truth supermarkets must face is that they cannot sell meat at the volumes they do without being involved in deforestation. To kick deforestation off the ingredients list for good, at least half of supermarket meat aisles need to be bursting with affordable, healthy, plant-based foods. There is no alternative. We’re at peak meat.

Educating consumers can go alongside changing practices but problems arise when supermarkets use the former to excuse inaction on the latter. Passing the buck when the buck stops with you is a move straight out of the oil company playbook on greenwashing. Remember BP unveiling a calculator to measure your carbon footprint?

In a similar vein, last year Tesco announced a target to boost plant-based sales by 300%. Without an accompanying ambition to reduce meat overall, that’s just a food shop pledging to sell more food.

The Independent Panel on Climate Change is clear that meat reduction is fundamental as part of tackling the climate crisis: “Plant-based diets can reduce emissions by up to 50%.” In a recent survey by Mighty Earth, 87% of respondents said supermarkets should drop forest destroyers. There’s never been a bigger mandate for change. The question is which supermarket will lead from the front?