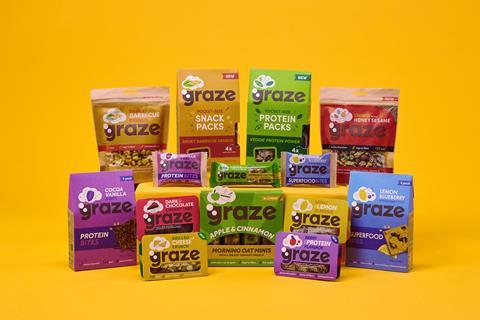 Food giants Kellogg’s, Unilever and PepsiCo are battling to buy healthy snacks business Graze, as bidding kicks off more than a year after a sale was first announced.

The Grocer understands first round bidding has taken place for the snack business as PE owner Carlyle, which hired Harris Williams to find a buyer in autumn 2017, looks to secure a sale by Christmas.

Graze, which was founded by Graham Bosher in 2008, was bought by the PE giant in 2013 for £50m, and has since rapidly expanded in bricks and mortar stores after establishing itself as a direct-to-consumer supplier.

Industry sources have told The Grocer that bids were filed by the potential buyers at the start of October, with Kellogg’s, PepsiCo and Unilever leading the way.

It is understood Carlyle is hoping to sell Graze for £250m to £300m - more than five times what it initially paid.

It is also understood Kellogg’s made a pre-emptive bid in the spring, ahead of the planned auction, but failed to agree on a fee.

“Kellogg’s has had a woeful time in snacking of late, so it makes a lot of sense that they are really keen to buy Graze,” said an industry source. “It is definitely looking to grow through acquisition in healthy snacking; they bought RX Bar in the US last year.”

City sources have described the initially reported £300m asking price for Graze as “insanely high”, with one dealmaker saying he would “eat his hat” if anyone met that sum.

“Graze has done very well in UK retail recently, but its subscription business has shrunk, and that was the part of the business which was very high margin,” he added.

Dealmakers say the business’s six channels - subscription, online and retail, in the UK and US - is a key part of its appeal, with the food groups eyeing growth through global distribution.

It has been suggested Carlyle is seeking an EBITDA multiple of around 30x.