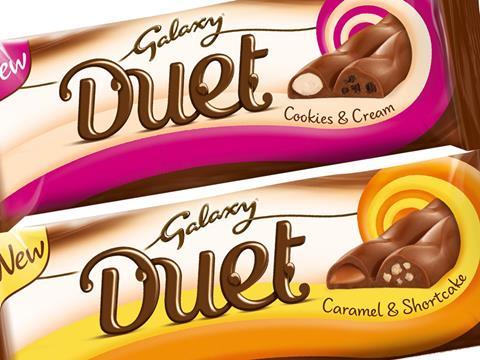 Mars is hoping the launch of new Galaxy sub-brand Duet will be music to shoppers’ ears.

Rolling out from August, Duet comprises two chocolate bars that use a new format consisting of two fingers of chocolate that each contain a different filling - one bar has Cookies & Cream and the other Caramel & Shortcake (both rsp: 60p). This gave consumers the option to eat the two flavours individually or experiment with mixing them, said Mars.

Duet was the first launch from Galaxy following Mars’ decision to treat it as a ‘challenger brand’, said senior brand manager Christoph Weber. “We are the number two in the UK chocolate category and we are looking to become the preferred choice for consumers by acting like a challenger brand and focusing more on innovation,” he added.

Duet had been developed specifically for the UK and Ireland over a three-year period that included research focused on how to make Galaxy relevant to more eating occasions. “Duet is targeted at the ‘treat me’ occasion when consumers want smaller products to treat themselves with,” he said. “Consumers told us such products could either be too indulgent, or were too light and playful but were not chocolatey enough. With Duet we are offering a good chocolate hit but are still playful.”

Weber said Mars was looking at how NPD based on the concept of combining flavours could be used to build on the launch of Duet.

Mars is supporting Duet with a dedicated £1.5m TV advertising push from September for four weeks, part of a £12m media spend on Galaxy in 2015 with 35 weeks on TV - making Galaxy the most advertised chocolate brand in the UK, said Mars.

Value sales of Galaxy, which was expanded with a salted caramel variant this year, are up 10% year on year [Nielsen YTD 30 May 2015].