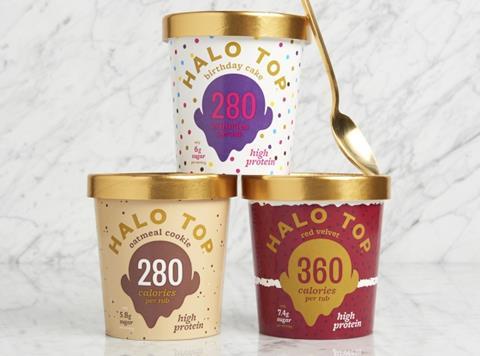 The three new flavours will roll out into Tesco, Whole Foods and Ocado

US ice cream sensation Halo Top is bringing three new flavours from its low-cal line-up to the UK.

Halo Top’s Birthday Cake, Red Velvet and Oatmeal Cookie flavours (rsp: £5/473ml), each with only 280-360 calories per tub, roll out into Tesco this week, followed by Whole Foods and Ocado in late July.

To celebrate the launch the brand will host an ice cream pop-up bar, complete with a giant 10ft replica of a Halo Top tub suspended from 2,700 balloons, at London Potters Field next week, where thousands of free samples of the new flavours will be handed out to consumers.

Halo Top, which originally launched in the UK with a seven-strong lineup in January 2018, said it had already gained an “incredible” number of British fans despite competition from Unliever’s low-cal and high-protein Breyers Delights brand.

“The response from our UK fans has blown us away,” said COO and president Doug Bouton.

”The only reason that we’re able to launch more flavours so soon after our initial launch is because of our incredible UK fans, and we think giving them three more flavours to enjoy this summer is the perfect way to say thanks.”

Halo Top, which was founded by former lawyer Justin Woolverton in 2011, was the number one selling ice cream in US grocery stores last year.

The Californian brand currently imports ice cream directly from the US to supply the British market, but told The Grocer in February it was looking into the potential for UK production following a “wildly successful” British debut.