Noble takes another crack at premium eggs with Heritage Breeds 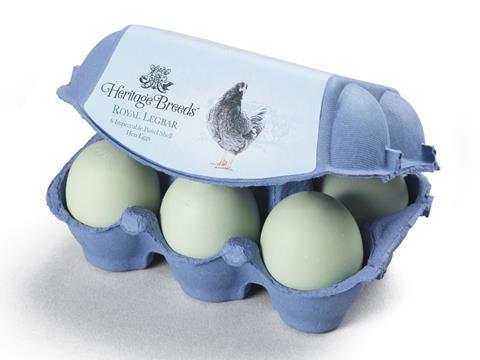 Happy Egg Co owner Noble Foods has launched a second attempt at a speciality egg range to capitalise on the popularity of eggs.

Just like the Posh Birds range, Heritage Breeds will feature duck, hen and quail eggs from British farms, produced in small free-range flocks. But the new range also boasted a wider product offering that catered to the retail grocery, convenience and foodservice channels, the supplier said.

The new range would have “the scale and bandwidth to trade up shoppers to significantly grow the speciality egg sector and become a leading brand”, said Noble Foods marketing director Geraldine Phillips.

It comes as volume sales of eggs are up 5.5% year on year, the equivalent of 300 million extra eggs [Kantar Worldpanel 52 w/e 26 March 2017]. Over the past 12 weeks, growth has been even stronger, with 7.4% volume growth, according to the British Egg Industry Council.

“Speciality is the fastest-growing segment in fresh eggs, yet approximately nine out of 10 UK households remain unaware of the benefits of higher-quality eggs,” said Phillips.