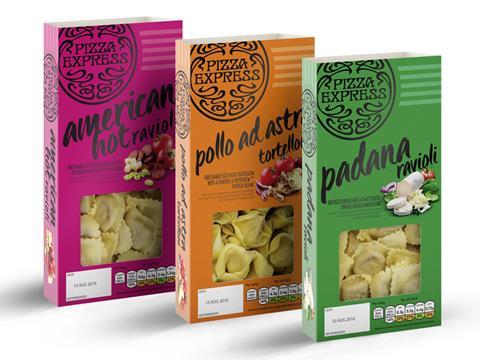 Pizza Express has launched its first gluten-free retail pizza as part of a wave of restaurant-inspired NPD hitting stores.

The gluten-free 9” Margherita pizza will be available at Sainsbury’s from 1 June (rsp: £4.50), while seven filled pasta flavours based on the restaurant portfolio will be rolled into Waitrose from 16 May - Fiorentina, La Reine, Margherita, Sloppy Giuseppe and Polla Ad Astra tortelloni, as well as American Hot and Padana ravioli (rsp: £2.99).

Gluten-free is a big focus and the business will look to “extend choice and range” if the pizza proves successful, he added.

The Pizza Express retail brand has grown 9.1% to £107.6m [Nielsen 52 w/e 2 January 2016]. Chilled pizza, which accounts for 85% of sales, is the biggest source of growth, said Ward, adding there was a “significant opportunity” to cross-sell pizza consumers into other categories.

The NPD closely follows this month’s new look and improved recipes across the retail portfolio in an attempt to create “clearer alignment across categories”.

The relaunch is being supported by social media and new promotional mechanics from June, aimed at driving ­restaurant consumers into the retail channel.