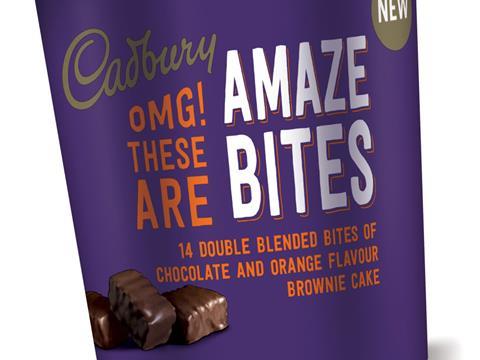 Premier Foods is extending the Cadbury Cakes portfolio with a range of chocolate-covered bitesize brownies.

Amaze Bites would set themselves apart from similar products as they featured a “unique double blended” texture achieved by creating a finished cake that was then crumbled and blended again, according to head of Cadbury Cakes Joanna Agnew.

“Amaze Bites is a totally different product from other Cadbury products in the market and is more suited to adult sweet snacking,” she said, adding the NPD was a “true step change” for Cadbury Cakes.

Cadbury launched a Cake Bites range in 2008 but this was phased out in 2011, when Premier focused its attention on the core Cadbury Mini Rolls and Cake Bars. The supplier said it had invested significantly in its production facilities to launch Amaze Bites.

Premier – which also produces Cadbury ambient desserts under licence from brand owner Mondelez – will be hoping to cut itself a slice of the £79.5m cake nibbles and bites category, up 10.1% in value [IRI 52 w/e 20 June 2015].