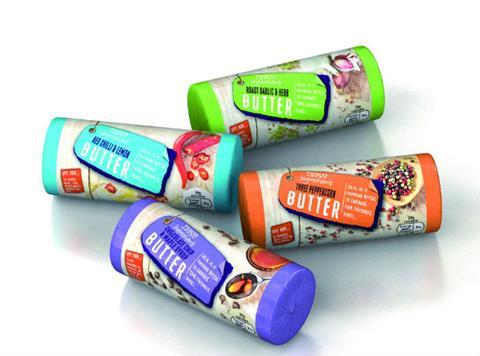 Tesco has launched a range of savoury and sweet flavoured butters in a bid to add “excitement” to the dairy aisles.

Tesco UK NPD manager Emma Ahmed said she believed the butters would “add value and volume” to the category and become a staple for budding cooks.

“We are always exploring ways of adding innovation and excitement to the butter category and these versatile butter logs, produced for us by Irish manufacturer Mr Crumb, fill the bill perfectly,” she added.

“I am particularly excited about the unique sweet option - chocolate chip & maple syrup butter. Perfect for simply spreading on to toast, pancakes and melting over brioche, or used as a sweet cheat’s ingredient for quick cookies, or as a twist to bread & butter pudding”.

The butters have been in development for six months and Ahmed claimed they had all received “great feedback” from rigorous taste panels.

She hinted that further flavours could be launched with Mr Crumb, including “limited editions and seasonal varieties”.