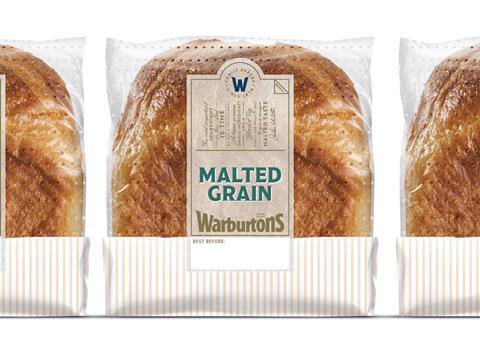 Warburtons is going upmarket with the launch of a trio of artisanal loaves, following a £1m investment in a bakery in Milton Keynes.

Aimed at tapping the rise in popularity of ‘craft’ bread, a sourdough lineup is set to roll out in white, mixed grain and seeded variants packed in paper and film.

The thick-crust loaves would be handmade in “very small volumes” said Warburtons chairman Jonathan Warburton, and sliced for convenience. “We want to find the sweet spot between traditional packaged bread and the true artisan bakers.” They have a shelf life of about three days and are sliced for convenience, inspired by Warburtons’ premium sliced loaf launched in 2014 - which had “amazed us” Warburton said. “This is the next iteration.”

The Bolton bakery giant is looking to launch the artisanal loaves with Sainsbury’s in a limited trial around Milton Keynes at the end of May, though Warburton “wouldn’t say no if another retailer or two wanted to play”. Rsp is “around £2.50”, as the loaves are three times as costly to make due to the long fermentation process.

The sourdough was “a confident step into new territory” according to Warburton. While Warburtons launched a sourdough in 2005, it failed to take off as it was “ahead of its time” but it was “like white bread with a sourdough addition - whereas this is truly authentic”. The market was now “mature enough” for true sourdough, he added.

It comes as traditional wrapped bread has returned to volume growth for the first time in five years thanks to Brits buying into new artisanal formats and turning their backs on low-carb diets. Volume sales rose by 0.3% last year to 3.7 billion kg [Kantar Worldpanel 31 December 2017].

Warburtons would “love to make everything artisan”, added Warburton, “but we’re realists. We’re unashamedly high-quality mass market bakers, and proud. But there’s an increasing amount of people who want the flavour, texture and mouthfeel that artisan gives you but with the usability of mass market and just as we feel we need to be in gluten-free, we think we need to be in this space too.” The £1m investment in the Milton Keynes facility includes equipment. The bakery is capable of producing 30,000 units per week “if we really crank it up”. Warburton added: “I could see us investing in three or four more if it’s a success