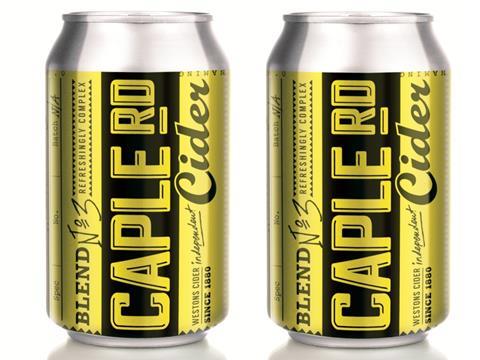 The 5.2% abv sparkling cider is rolling out now to retailers including Little Waitrose, Booths, Whole Foods Market and deli chain Sourced, as well as independent stores.

Named after the road that approaches Westons’ site in the Herefordshire village of Much Marcle, Caple Rd Cider is matured for up to 18 months to give a “refined, full-bodied, amber-coloured cider”, said the supplier.

“Caple Rd has been designed to challenge cider-makers’ palates, with its dark straw colour, notes of leather on the nose, and robust oaky taste,” said Caple Rd cider maker Guy Lawrence, who is part of the fifth generation of the Weston family to make cider from the site in Much Marcle. “Slow fermentation and up to 18 months’ maturation produce a highly complex, full-bodied cider.”

“The canned craft beer category has seen huge growth over the last couple of years, yet so far no one has launched a craft cider in a can,” he added. “The launch of Caple Rd into the off-trade brings some genuine innovation to this sector of the market.”