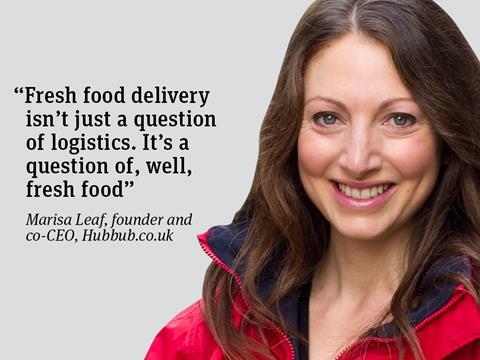 In 2014, when the Ministry of Justice announced plans to introduce competitive tendering in criminal legal aid contracts, logistics firm Eddie Stobart announced it would be bidding. There was an outcry - legal aid lawyers asked what being able to drive long-distance trucks for supermarkets had to do with delivering justice. The government subsequently amended its proposals and Eddie Stobart backed out.

I started Hubbub in 2010 with a simple mission: to deliver the best food from the best local independent shops, with a single payment, in a single delivery, in a one-hour same-day delivery slot. Since then, we have grown substantially, working with many of the UK’s best retailers. So has the news that Amazon, the world’s biggest online retailer, is launching Amazon Fresh in the UK filled me with terror?

Actually, no. Obviously, I’m not dismissing Amazon and it has an enviable track record in other sectors. I have an Amazon Prime account and I’ve (almost) ordered more nappies this year than I’ve had hot dinners.

But fresh food delivery isn’t just a question of logistics. It’s a question of, well, fresh food. Take bananas. They’re an awkward shape, and don’t lend themselves to being stacked. They require temperature control. They bruise easily. Packing them next to a watermelon and a raw chicken takes some thought. And of course, some people like them ripe, and some like them green. This is not like delivering a Kindle. Some categories are sufficiently complex that specialists win, even against Amazon; ASOS wins on clothes, Zappos was so good at shoes Amazon bought it. With fresh food, you need customised vans and staff with specific expertise. And then there’s the thorny issue of substitutions - to do it well, you need people who are passionate about customer service and knowledgeable about food.

Amazon is being characteristically secretive about its plans. But given its emphasis on the customer we can assume the Amazon Marketplace model is off the table for fresh food (no one wants steak arriving in one delivery, potatoes in another and spinach waiting at the Post Office). So it will be faced with the same choice I was faced with five years ago when I set up Hubbub. Either you warehouse the food - which is bad news on quality and freshness. Or you make the supplier bring it to you - bad news for the supplier. Or you do what we do, and pick each order up from each supplier every day.

All our systems are designed to deliver fresh food. We don’t sell anything else. And I like our chances of continuing to deliver it better than anyone else.

Amazon Fresh already operates in the US. But in the US there is no Ocado. Or Hubbub. Their supermarkets don’t deliver. The UK is the most advanced online grocery market in the world and we have correspondingly high expectations - and plenty of choice. It seems to me Amazon Fresh (despite the name) will make sense for bulk, non-fresh, stock-up shopping: baked beans and rice. But for Indian Alphonso mangoes, or English strawberries from Portobello Market, you know where we are.

Marisa Leaf is founder and co-CEO of Hubbub.co.uk