European lessons on the living wage 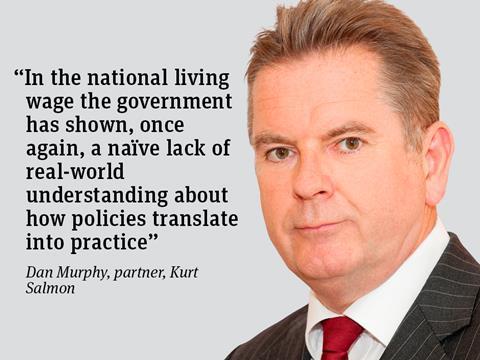 On the national living wage the government has shown, once again, a naïve lack of real-world understanding about how policies actually translate into practice.

As with the Sunday Trading proposals earlier this year, if politicians had actually bothered to ask retailers what they thought, they would have realised that their policies would harm employee/employer relationships and lead to both internal and external criticism.

The truth is that UK retailers are under such a variety of pressures currently - price pressure from the discounters; margin pressures due to rising costs; huge investments in e-commerce, and in particular servicing home delivery; increases in business rates etc - that they were never simply going to be able to absorb the minimum wage hikes without taking mitigating action elsewhere.

A recent British Retail Consortium report into UK retail examined the pressures on UK retailers and concluded that our major retailers face cost increases of between £1bn and £3bn over the next five years, which is likely to lead to 900,000 fewer jobs in retail by 2020.

Retailers have very high levels of operational leverage, so any increases in costs usually drop straight to the bottom line.

We are already seeing many retailers making significant changes to pay structures, including stopping overtime and Sunday premium payments; cutting performance bonuses; and stopping long-standing perks such as free lunches and paid breaks. If our legislators really understood the fundamentals of how retail works, they would have realised this was inevitable. What else did anyone expect?

Whilst it is hardly surprising that retailers are responding in this way, there are some very interesting case studies to be observed in other countries which suggest that there may be other answers.

Take Spain’s Mercadona, for example, one of Europe’s most successful grocery retailers with 1,600 stores and 74,000 staff. Despite suffering more than most from macro-economic pressures over the last few years, Mercadona has all its staff working 100% full time contracts - it refuses to have anything to do with zero hours contracts. It provides all its staff with paid holidays; crèche facilities; and wage structures as much as 20% above Spain’s minimum levels. Despite these apparently suicidal costs, Mercadona consistently returns above average performance - in 2015, annual sales increased by 3% while profits grew by 12%.

Mercadona offers an alternative to retailers who believe the only response to wage increases is to cut staff hours. Perhaps, as Sir Charlie Mayfield, chairman of the government commission on employment and skills, has suggested, an alternative route is through growing productivity among our stores and people. Perhaps increased investment in people, skills, and training might result in improved productivity for retailers, which might more than offset the increased costs of the national minimum wage. If we look at business like Mercadona, it doesn’t seem such a silly idea.

Dan Murphy is a partner at Kurt Salmon