End of an era at the FSA 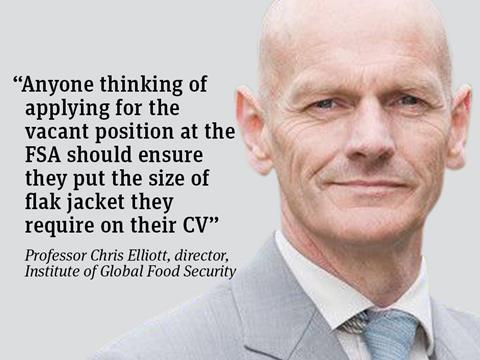 The announcement of the resignation of Catherine Brown from her role as chief executive of the FSA last week was an unusual one. It was made the day after an FSA board meeting and in a very low-key manner. Hardly what you’d expect from someone with a rather high profile. Her reign started only a few months before Horsegate, and dealing with the media in the eye of a storm proved a difficult baptism of fire.

Not only horsemeat in our burgers but campylobacter in our chicken dominated the Brown agenda. I think it only fair to say the actions (and indeed lack of action) by the FSA on horsemeat cannot be attributed to her but rather an agency that had struggled with its purpose in life since the start of the coalition government back in 2010. However, the campylobacter crusade is a different matter. I believe I have been quite consistent in challenging how the agency went about trying to tackle the incidence of campylobacter poisoning.

So where are we now with this? Several years of playing the ‘name and shame game’ with retailers has resulted in claims from the FSA that this strategy has been very effective. Yet, as far as I can see, the available data points to no significant reduction in cases of the disease.

So what lies in store next for the FSA? It has a new chair (Heather Hancock) who has extremely strong credentials and, importantly, very good contacts in government. The appointment of a new CEO must now be her top priority. The role for the new leadership must be to address the appalling loss in scientific expertise the agency once boasted and to start to build bridges with the UK food industry, which feels it carries more battle scars now than at any other time in the history of engaging with the FSA.

For those thinking of applying for the vacant position, please ensure you put the size of flak jacket required in your cv. The position of FSA CEO is a hugely difficult one: grappling with a government hell bent on cutting public services while tackling the multiple issues in a complex national food supply system. When things go well there are no news stories. When things go wrong you’re on the front page for all the wrong reasons.

Chris Elliott is director of the Insitute for Global Food Security at Queen’s University, Belfast