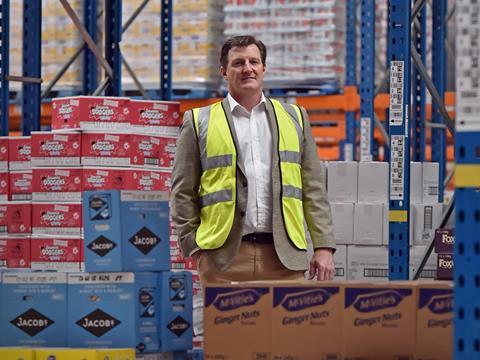 Logistics never stops. “It’s the nature of the beast,” says Liam McElroy, MD of retail at Wincanton. “When I started in logistics in 1990 there was no Sunday trading, let alone online. The world has changed. It’s 24/7 now. It’s an interesting challenge that demands making effective use of your time. When I was at Tesco, Philip Clarke, dare I say it, always used to say that.

McElroy was Tesco’s regional distribution director for the South between 2000 and 2003, working alongside Clarke, and however horribly his tenure as Tesco CEO ended, Clarke’s earlier work as supply chain director is often spoken about in glowing terms.

“He was inspirational,” says McElroy. “Some of the work we did in those days was industry leading. From how we simplified the supply chain to the work we did to upskill colleagues. I look back at that time and, from a learning point of view, it was a fantastic experience. It was a brilliant leadership team.”

McElroy arrived at Wincanton in 2006, via Exel and DHL. As he rose up the ranks, e-commerce rose with him and McElroy believes it now presents one of the two biggest challenges facing the retail supply chain.

“Online demands a rapid response and a need for agility. And Black Friday is absolutely fascinating. It’s a phenomenon, last year £1bn was spent over that weekend. People were using Black Friday and Cyber Monday to do their Christmas ordering and that pulled the peak away from Christmas, which was actually quite helpful.”

Black Friday crashed several retailer websites and McElroy says their DCs also feel the strain. “Sales of that level that early place strain further back in the supply chain in terms of inbound forecasting, because a lot of these goods come from the Far East. So that ability to be able to react quickly and pull stock - and labour - in from other places has been a fantastic challenge. In logistics we see it, we understand it, but the challenge is to be able to react to it and provide the help and support.”

A less welcome side-effect of the online boom is that customers are becoming “less tolerant and less loyal,” he says. “Social media is huge and retailers have to be cognisant of that, because you can be damned on Twitter. And we really feel that in logistics. In home delivery for example, we have nothing but really good feedback, but if we get it wrong my brand is all over the web in a negative way. So we put so much energy and effort into getting it right. Our drivers go into a customer’s home and you cannot get that wrong.”

The other big challenge that has emerged in logistics in recent years is the rise in convenience.

“We have a considerable estate of grocers within our retail division, 50% of that is convenience, and that 50% has come on stream in the last three years. That gives you an idea of the growth. And we are carving out quite a niche in that area to say ‘This is how you do it.’”

As examples of how Wincanton is tackling the challenge of servicing urban c-stores, often set in tricky locations complicated by myriad delivery restrictions, Wincanton has redesigned roll cages to speed up the process and introduced a tighter turning circle for its convenience trucks “so they can access difficult stores,” says McElroy. “It’s bred innovation. I could go on for years about convenience.”

With the positive can-do attitude you might expect from a man who has spent his life in logistics, McElroy insists both challenges are opportunities. And the results Wincanton released on Thursday suggest it is meeting the challenge those opportunities present.

“Wincanton has continued to deliver against our strategy and achieved revenue and profit growth plus further reductions in net debt,” said outgoing CEO Eric Born, who will be replaced by group finance director Adrian Colman on 1 August 2015.

So the boom in online and convenience can create headaches, but they are money-spinners, too. Yet there is another pressing issue for logistics without such an obvious flipside; a driver shortage is looming.

Over “the last 12 months” Wincanton has been working “really hard on retention plans, literally going around site by site. We’ve introduced a programme called Walls to Wheels where if you work in a warehouse we can help you become a driver. We have had some phenomenal success there. We’ve looked at other areas, like the MoD, where qualified drivers are leaving the forces. We want to take them on.”

Status: Married with two children, one of each

Best career decision: Getting into logistics. I’ve never been out of it. I absolutely love it

Worst career decision: I’ve no regrets but I’ve been in places where I think I could have done better. But I’ve always learned from it

Hobbies: I’m an Arsenal fan, although being based in Northampton means I go to more away games than home nowadays

Wenger out? He should go upstairs. It’s time for him to move on and for Arsenal to have a fresh and different perspective. He should go with a bit of grace before it goes horribly wrong

Favourite meal: Paella with a nice bottle of Barolo

Business mantra: Begin with the end in mind