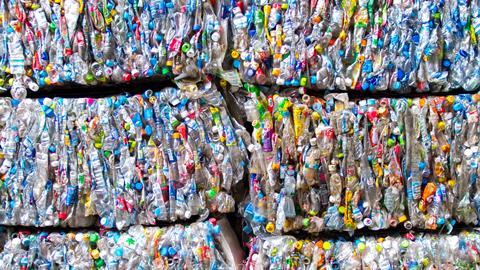 Could coronavirus be the last straw for recycled plastic?

Will the coronavirus crisis turn back the tide on the fight against single-use plastic? That was the question posed last week as campaigners accused food and drink suppliers of taking advantage of the pandemic to block new laws on plastic reduction.

It followed Defra’s decision to delay the UK ban on plastic straws, stirrers and cotton buds until at least October 2020. MPs have also lifted the charge on single-use plastic bags for online grocery delivery, while Scotland’s DRS scheme has been delayed for at least a year.

Suppliers dismissed the claims as “misjudged”, pointing out their efforts have been focused on getting food on shelves during the pandemic, not lobbying on plastics.

Wrap, meanwhile, insists the industry remains “committed” to the UK Plastics Pact. Members are still on track to remove a total of 1.1 billion items of “problematic and unnecessary” single-use plastic by the end of 2020, says Wrap strategic engagement manager Helen Bird, with “several items, such as straws and cotton buds, having already been eliminated by the majority of members”.

But the pandemic will have an impact on the industry’s ability to meet other targets on plastic, experts warn. Not least because it’s threatening to tip the recycling industry, which was already in crisis, over the edge. So what’s going on?

The global recycling industry has been in crisis for several years, says Tom Szaky, CEO and founder of TerraCycle. That’s because its business model depends on the value of the end material being higher than the cost of collection and processing.

And it’s a problem that predates the outbreak of Covid-19 for three reasons, says Szaky. First, crude oil prices plummeted significantly in 2014 and have remained low since. “Oil is cheap,” says Szaky. “And oil is what defines the material value because plastic is oil.”

Second, after importing almost half the world’s plastic waste for three decades, China banned imports of post-consumer plastic in 2017. A number of other Asian countries followed with their own restrictions. “While waste companies can still find markets for things like PET, HDPE and aluminium in their domestic markets, a lot of the other plastics they were able to sell they can’t sell anymore,” says Szaky.

And third, packaging is getting lighter - which is adding to the cost of processing recycled materials. “The lighter the packaging material, the less profitable it is to recycle,” Szaky says.

However, the coronavirus outbreak could just be the last straw. Global lockdowns have resulted in a slump in demand for fuel, causing the price of crude oil to plummet to multi-decade lows. In January, crude oil prices were close to $70 a barrel. Now, Brent crude is trading at around $20 a barrel on the ICE.

“If it wasn’t for the PRN at the moment, which is at around £250/tonne, UK plastics would be in negative pricing,” says Simon Ellin, CEO of The Recycling Association.

But even with the PRN, the low price of oil makes plastic recycling a “very difficult economic model”, he adds. “You have to try and have the infrastructure to collect a material which isn’t worth anything. That’s the conundrum.”

At the same time, the coronavirus pandemic is affecting collections of recyclable materials. “Stretched local authorities have needed to prioritise getting rubbish collected and in some cases this has resulted in reduced services,” says Bird.

This appeal to Defra was “successful”, says Ellin, with many councils since reversing their decisions. However, the closure of non-essential retailers and restaurants during lockdown means there has been a huge drop in availability of high-quality retail cardboard, paper, glass, metal cans and plastics packaging.

Conversely, home deliveries from supermarkets and the likes of Amazon have increased, meaning more material is being generated at household level. “Household waste is more expensive to collect and process,” says Ellin.

It’s all threatening to seriously undermine the availability of recycled materials - at a time when demand for plastic packaging is back on the rise due to its protective and perceived hygienic properties.

“Plastic has a very important role to play in protecting and preserving food during the pandemic,” says Barry Turner, director of the Plastics and Flexible Packaging Group at the British Plastics Federation. “It is extremely important during the coronavirus outbreak that food can be safely and hygienically provided to the public.”

Both paper and plastics are now “very short” across Europe, says Ellin, though that hasn’t had much of an impact on plastic prices “because the price of oil has fallen through the floor”. On cardboard, in contrast, “prices have increased tenfold”.

These challenges will make it difficult for the industry to meet its target of 30% recycled content for plastic packaging by 2025, Ellin warns. “Where is your material going to come from? If the economics don’t work, it’s going to be such a challenge to get that 30%.”

One silver lining, says Szaky, is that “Covid-19 is showing the world is breathing better when we slow down”.

“I believe that’s going to give tailwind to the environmental movement overall when the worst of the pandemic has passed,” he adds. “And recycling is always the first thing people go to because it’s the easiest thing to understand.”

That should encourage brands to move forward with commitments and potentially even pay a significant premium for recycled plastic.

At £200 per tonne (on all packaging containing less than 30% recycled content) the plastics tax, set to come into force in April 2022, will be another strong incentive.

A shake-up of extended producer responsibilities and a reform of the PRN system due in 2023 could also improve the equation. “The producer will have to pay for the full cost of disposal of the material. At the moment they only pay around 10%-20%,” says Ellin.

However, most of the money generated has been earmarked for local authorities to put proper collection infrastructure in place. “That’s great, but we don’t see much trickling down to processors,” says Ellin. “Getting this right is going to underpin whether we can achieve those objectives of 30% recycled content.”

If these reforms are delayed amid the coronavirus chaos, it’s hard to see how the plastics recycling industry will keep its head above the water. And without an effective recycling system, reducing single-use plastic will be nigh on impossible - washing away any hope of food and drink hitting its targets.