Tesco's Fresh 5: how do its fruit & veg prices compare to the other mults? 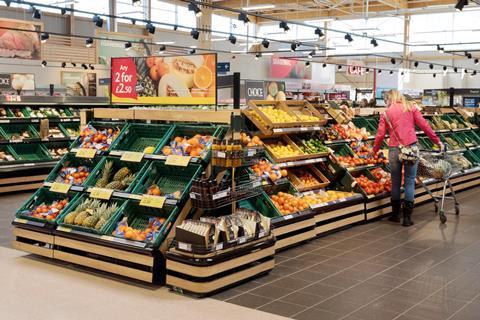 Tesco is undercutting the discounters with its new Fresh 5 promotion, which it claims will make it “easier and cheaper” for its customers to make healthy choices. So how do its prices compare with its big four rivals?

The supermarket’s Fresh 5 deals kick off this month with vine-ripened tomatoes 230g, Jersey Royal potatoes 450g and apricots 320g, all down from £1 to 45p, as well as flat peaches (minimum four-pack) and a ­perfectly ripe mango, down from £1 to 39p.

It comes amid a wider push in Tesco in terms of the number of fresh produce promotions in its stores, the data shows.

From 1 January to 30 May 2019, it ran 201 promotions on fresh fruit & vegetables (excluding prepared salad and potatoes). In comparison, Sainsbury’s had 160 promotions over the same period, while Morrisons had 132 and Asda had 159 [Edge by Ascential].

However, Tesco is not necessarily cheaper than its rivals for fruit & veg, the data suggests.

The data also revealed the price of these two baskets has increased by 2.1% year on year on average across the big four supermarkets.

Most of the fruit SKUs are cheaper than last year, including a 500g pack of seedless grapes, which is down 9p to £1.90 on average, and a pack of five Braeburn apples, which is 14p cheaper at £1.20.

All of the SKUs in the vegetable basket are more expensive than last year. Onions have seen the biggest rise, up by 18p to 78p, while a whole cucumber is up 8p to 57p on average and a kilo of carrots is also up 8p to 67p.