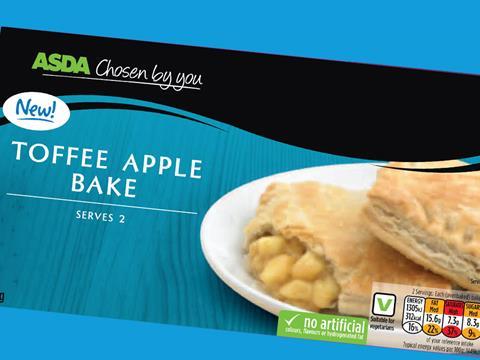 Why: Sold in a two-pack, these frozen bakes comprise puff pastry with a toffee apple filling and cook from frozen in about 25 minutes. Asda will hope these buck the trend in the frozen desserts category, where sales have fallen 8.6% by value year on year [Nielsen 52 w/e 11 October 2014].

Consumer verdict: Although some testers felt the packaging was “boring,” the £1 price point helped maintain a reasonable level of pre-trial interest. However, levels did not increase after trial, with many testers criticising the product for having “too much pastry or not enough filling.” The pastry was regarded by some as having a “light, crispy texture,” but this failed to redeem the perception of poor overall product quality. The resulting ratings were close to or below the average for the category, with the exception of a good score for ‘value for money.’ The majority of testers felt there were better options available, and more than a quarter claimed they would never buy. However, some believed it would make a good freezer standby as a cheap family dessert.