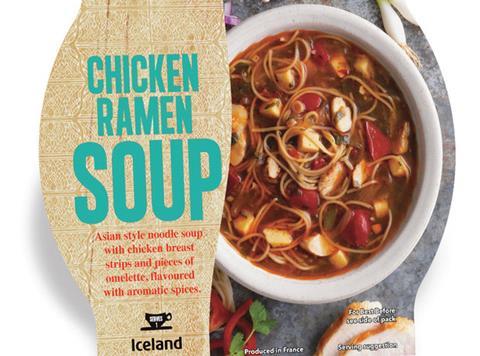 Why: In a soup category where ambient is struggling, with sales down 2% to £400.2m, and fresh is up 2.8% to £186m [Nielsen 52 w/e 10 October 2015], frozen is a little-tapped third way. However, Iceland now offers a range of 10 flavours, ranging from classic variants to more unusual ones. Vegetable minestrone, tomato & basil, chicken & sweetcorn, French onion and mushroom sit alongside borlotti bean & pasta, carrot & cardamom, Tom Kha, hot & sour and this noodle recipe.

Consumer verdict: Our consumers were intrigued by what they saw as an unusual idea. Served after being heated in the microwave as per the instructions, it received a mixed reaction for its flavour, texture and appearance. Some liked the “lemony” taste and consistency, while others were put off by the pieces of omelette and salt content. However, the good value for money helped it to score four points above the norm, and about half of our testers said this would work well as a standby or a midweek option.