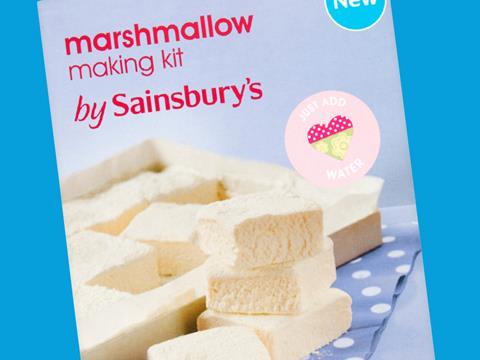 Why: While interest in marshmallow has been growing in recent years, much attention has focused on fancy, premium products. Sainsbury’s kit, however, offers an interesting family option and is currently flagged up as an ideal ‘rainy days’ activity on the retailer’s website.

Consumer verdict: Parents of older children were the most attracted by this kit. Testers who made the marshmallow reported no difficulty in following the instructions, though they were left with plenty of washing up. The response to the finished sweets was mixed but the consensus was they were not as good as a ‘bought’ version, and purchase intent fell slightly after testing. The mixture had to be whisked for eight to 10 minutes, and it was difficult to achieve the fluffiness of a ready-made marshmallow. The majority of testers managed a product that was “quite light” and “very sweet”, but there were complaints it was more like nougat than marshmallow.