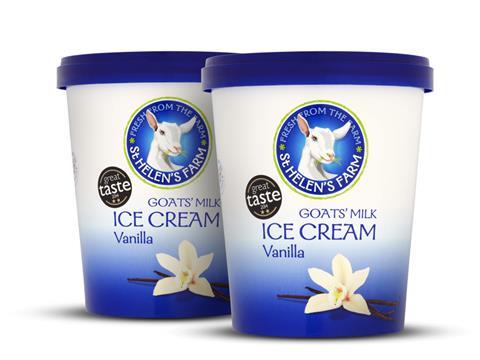 Why: Vanilla may be on the decline as an ice cream flavour but it is still one of the most popular, accounting for 18% of ice cream NPDs launched in the past year [Mintel]. This product from St Helen’s Farm stands out in a crowded sub-category by using goats milk instead of cows, tapping consumers’ increasingly adventurous tastes. It is also available as a chocolate variant, and is listed by Waitrose.

Consumer verdict: Though the brand was relatively unknown, the brightly coloured packaging stood out, with more than half of our consumers claiming they would notice it. Nearly 90% agreed goats milk brought something new to the category. Some described the ice cream as “very creamy”, “smooth” and “refreshing”, whereas others thought it “expensive”, “gloopy” and “goaty”. Though not considered an everyday item, it received mostly positive responses, with its overall score four points above the category norm.

Better than what’s out there:76%