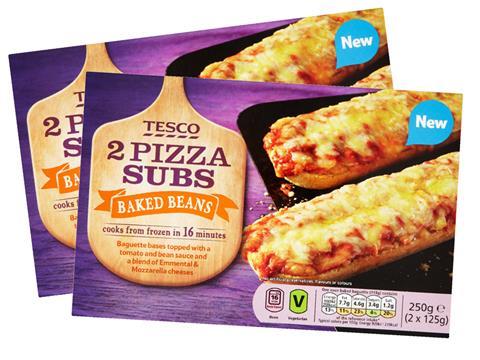 Why: Baked bean sales may be down 3% year on year but they remain a significant part of our national diet: we spent £333.5m on 290,000 tonnes in the year to April - more than 11 cans per person [Kantar 52 w/e 26 April 2015]. Part of a range that also includes a more conventional pepperoni flavour, this pizza sub takes the humble pulse and attempts to turn it into a tasty topping.

Consumer verdict: Tested by a panel of both adults and children, this product divided opinion by age and region. Testers in the South were far more receptive than those in the North, who found the flavour bland. Many adult testers were sceptical about the use of baked beans and disappointed with the delivery, especially due to the “rubbery” cheese, but children enjoyed it far more. Despite the concerns of some testers, the good value for money and health credentials offered by the product led 42% to say they would buy at least monthly. Rating a little below average on most measures, the product garnered a score one point below the category norm.