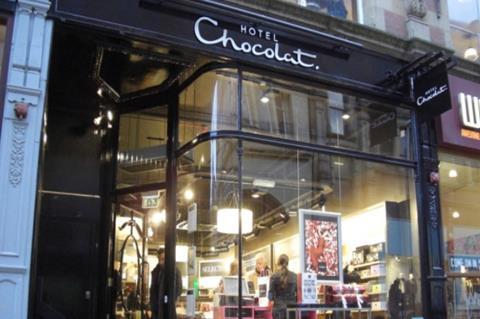 Hotel Chocolat (HOTC) has reported a double-digit sales increase in the six months to the end of December boosted by new openings in the UK and internationally.

The premium chocolatier and retailer saw sales rise 14% in the 26 weeks to December 29 compared to the prior year, while revenues surged 11% year-on-year if considering the 13-week-period to the end of December.

During the half, the group opened nine new UK stores, increasing its estate to a total of 125 locations. Internationally, two more stores were opened in the US and three joint-venture locations in Japan.

Co-founder and CEO Angus Thirlwell said the company will continue to increase its UK and international estate “where deals are appropriate”.

Internationally, Thirwell described 2019 as the year of “getting started” in the US and Japan. “2020 will see us accelerate our supply-chain transformation,” he added.

“This focus will rebalance us from being a UK-based company operating from owned channels, to one more suitable for multi-channel multi-territory international supply.”

Further developemnts included the launch of Nutmilk during the period, an “outrageously creamy new ‘milk’ chocolate which just happens to be 100% vegan” described as an immediate “hit”.

Trading since December “continues to be in line” with management’s expectations, the company added, despite some inefficiencies in the supply chain, which will be addresses in 2020, let to modestly higher costs.

Paypoint (PAY) group revenues rose 4.2% to reach £32.7m in the three months to 31 December 2019 due to a “resilient” bill payment business and growth in parcel volumes.

Service fee jumped 33% to £3.2m in the period while UK parcel volumes increased 13% to 7.6m reflecting a “solid performance” over the peak Christmas period.

Chairman Nick Wiles said: “Overall our results for the quarter reflect resilience in our bill payments business, growth in our parcels activities during the important peak parcels period and continued progress in the rollout of PayPoint One and our retail services activities.”

Due to the warmer weather, affecting energy transactions within UK bill payments, and parcel volume growth at the lower end of the company’s expectations, the company guided for a lower-than-expected annual profit.

“Overall, the board remains confident that there will be a progression in profit before tax and exceptional items for the year ending 31 March 2020, albeit it is now likely to be at a more modest rate than previously expected,” the company added.

Sainsbury’s (SBRY) shares closed 2.1% lower at 208p after the grocer announced the departure of CEO Mike Coupe in May.