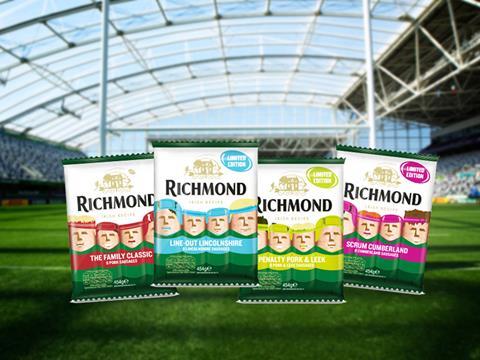 Global taste & nutrition and consumer foods group Kerry (KYGA) posted 3.7% growth in business volumes in the first quarter of 2018 and reaffirmed its earnings guidance for the full year.

Taste & Nutrition increased volumes by 4.3% and Consumer Foods, 1.6%, which good growth in food-to-go and snacking elevated.

The company said that its smoke and meat-free technologies were successfully deployed in a number of new launches in the UK and Northern Europe.

Agreement was also reached in the period to acquire a majority shareholding in Netherlands based Ojah - a market leading plant-based protein manufacturer in Europe, producing textured-meat alternatives.

Everyday Fresh enjoyed a good quarter, as Richmond benefited from the 2017 relaunch in the UK and the Fire & Smoke range also continued to perform well.

The traditional spreads category continued to be challenged, but Dairygold turned in a solid performance in Ireland, as did the division’s softer butter technology through private label brands within the UK.

Reduced promotional activity impacted Convenience Meal Solutions. Food to Go enjoyed a strong performance across both the Cheestrings and Fridge Raiders ranges, as they consolidated leadership positions in their target markets. Rollover also continued to grow strongly with a number of new listings.

Overall divisional volumes in the quarter were impacted by extreme cold weather spells in March. The Brexit mitigation programme made further progress in the quarter and is on track to deliver on its objectives.

Edmond Scanlon, chief executive, said the company was pleased with the start it had made to the year, which was in line with its expectations as communicated in February.

“The group continued to deliver healthy volume growth and underlying margin expansion. The acquisitions completed over the past year are performing well and integration is progressing to plan.

“Our industry leading business model and ‘from-food for-food’ heritage are ever more relevant in today’s marketplace and continue to underpin a strong innovation pipeline.

“In summary, we are encouraged by the start to the year and reaffirm our full year 2018 guidance of adjusted earnings per share growth of 6% to 10% in constant currency,” he said.

Kraft Heinz chief executive Bernardo Hees, said: “Our first-quarter results were consistent with, if not slightly better than, the expectations we expressed in February.

“The initial successes we’re seeing in the marketplace, together with the strong investments we’re making in marketing, new product innovation, and capability-building, give us increased confidence in delivering the top- and bottom-line growth we expect in 2018.”

Fresh food inflation gathered pace after three months of consecutive slowdown, with prices up 0.9% from 0.3% in March.

Ambient food inflation accelerated from 0.6% to 1.2%. Non-food prices decreased at a rate of 2.2% in April compared with the previous month when prices fell by 1.9%.

Overall shop-price deflation held steady at 1% last month – the 60th consecutive month it has been deflationary.

“The upward pressure on prices from the fall in the pound is weakening, leaving underlying commodity prices and strong competition for customers the key influences on inflation.”

The importance of addressing the issue of frictionless movement of goods across borders was increasing as Brexit negotiations continued to play out against this backdrop.

“Retailers must have clarity on this position if they are to continue to provide a wide range of goods for consumers at affordable prices,” she said.

Mike Watkins, head of retailer and business insight at Nielsen, added: “With weak consumer demand, any success in sales performance is coming at the expense of retailers’ margins, with lower prices in non-food and inflation now hovering around 1% in food stores.”

“So whilst promotional activity continued after Easter, retailers are still keeping prices competitive to tempt shoppers back into store as consumers not yet feeling better off.”

Molson Coors (TAP) posted both lower net sales and underlying net income as the US beer industry had a “softer-than-anticipated” start to the year, which chief executive Mark Hunter said impacted both top-and bottom-line performance.

This, when coupled with the US distributor inventory destocking and the anticipated cycling of the indirect tax provision benefit in Europe last year, led to an underlying EBITDA reduction of 18.5% in the first quarter.

Hunter said Molson Coors did not see these results as indicative of its full-year performance versus its plan, and it remained committed to delivering is 2018 guidance.

“Across Molson Coors, our teams are focused on our first priority, which is to drive margin expansion, bottom-line growth and strong free cash flow to enable deleverage.

“Our second priority remains to deliver an improved top line through our First Choice commercial excellence approach, which provides the most sustainable source of profit growth over the medium to long term,” said Hunter.