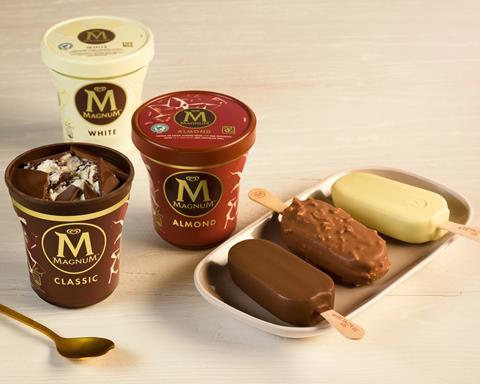 Unilever (ULVR) has posted first half underling sales growth of 3.3%, at the lower end of its 3%-5% guidance as performance was hit by weaker ice cream sales and Brazil’s trucker strike.

Underlying sales growth of 3.3% consisted of 1.2% from volume and 2.1% from price, driven by emerging markets growth of 6.2% amid weaker performance in developed markets.

Overall turnover in the first half decreased 0.9% driven by the sale of the spreads business, partially offset by a currency benefit of 1.1%.

Underlying operating margin improved by 50bps in the period to 19.3%, with gross margin up 30bps, helped by efficiencies.

Unilever said brand and marketing investment decreased compared to the prior year, as it continued to deliver zero based budgeting savings ahead of target, with an increased focus on digital spend. It said more than two thirds of savings have been reinvested, largely behind innovations and new brand launches.

Unilever CEO Alan Jope commented: “We have delivered consistent growth within our guided range for 2019, led by our emerging markets. Accelerating growth remains our top priority and we continue to evolve our portfolio and seek out fast growth channel and geographical opportunities, as well as address those performance hotspots where growth is falling short of our aspirations.

“For the full year, we continue to expect underlying sales growth to be in the lower half of our multi-year 3-5% range, an improvement in underlying operating margin that keeps us on track for the 2020 target and another year of strong free cash flow. Our sustainable business model and portfolio of purpose-led brands are key to delivering superior long-term financial performance.”

During the first half, its food & refreshment division delivered underlying sales growth of 1.3%, driven wholly by price as volumes dipped 0.1%.

In tea, sales declined with volumes impacted by weak consumer demand in developed markets. This was partially offset by black tea in emerging markets and our fruit, herbal and green tea ranges, including Pukka’s premium herbal offering.

Sales in dressings were flat with volumes slightly down as competitive intensity remained high. Despite poorer weather in the second quarter compared to the previous two years, ice cream grew slightly over the half.

Savoury performance was helped by the launch of new snack pot variants meeting the trend towards convenience. The introduction of Hellmann’s burger and spicy dipping sauces continue to broaden the brand beyond core mayonnaise, and Sir Kensington’s performed well.

Underlying operating margin in Foods & Refreshment decreased by 40bps, as a result of an adverse impact on overheads related to the disposal of its spreads business.

Its beauty and personal care division saw underlying sales growth of 3.3%, with 1.7% from volume and 1.6% from price, while underlying operating margin improved by 100bp driven by efficiencies.

In home care, underlying sales jumped 7.4%, with 2.8% from volume and 4.5% from price as fabric solutions performed strongly, benefiting from premiumisation. Home and hygiene also “grew well”, supported by double digit growth from Sunlight.

However, North American was flat, with price growth of 0.7% but volume declines of 0.5%, while in Europe underlying sales declined 0.6% with volumes down 0.2% and price down 0.4%.

Other key metrics included organic operating profit up 9%, ahead of top-line organic growth, driven by an improved price/mix and productivity benefits from what it said were everyday cost efficiencies, partially offset by cost inflation and higher marketing investment.

Europe and Turkey delivered 4% net sales growth, reflecting what it said was another year of consistent performance in the region where net sales climbed 3% with double digit growth in Turkey.

Western Europe continued to gain market share in gin. Both Gordon’s and Tanqueray benefitted from strong growth across their core and innovation variants.

Tequila grew double digit with growth across all markets. Ready to drink grew 17% driven by the Gordon’s premix range. In Turkey, net sales were up 11% due to inflation and excise duty led price increases.

Today saw Diageo approve plans today for a further return of capital up to £4.5bn to shareholders between 2020 and 2022.

Ivan Menezes, chief executive, said organic volume growth of 2.3% and net sales growth of 6.1% was broad based across regions and categories with new product innovation a strong contributor.

The period saw Diageo expand organic operating margin ahead of its guidance and increase investment in its brands ahead of organic net sales growth, he said.

“Our focus on quality sustainable growth is backed by a culture of everyday efficiency that enables us to invest smartly in marketing and growth initiatives while expanding margins,” Menezes said.

The results reflected the “steady progress” Diageo was making and as it looked ahead it saw attractive opportunities to deliver consistent growth and create shareholder value.

“In the medium term I expect Diageo to maintain organic net sales growth in the mid-single digit range and to grow organic operating profit ahead of net sales in the range of 5%-7%,” he said.

The world’s largest brewer AB InBev (ABI) said it has posted its best quarterly volume performance in over five years in its second quarter.

Total volumes were up 2.1% in the three months to 30 June, driven by strong performances in key markets such as Mexico, Brazil, Europe, South Africa, Nigeria, Australia and Colombia.

The company said it achieved this broad-based growth despite a difficult comparable period, as it lapped the impact of its 2018 FIFA World Cup Russia sponsorship, the largest commercial activation in its history.

Combined revenues of its three global brands, Budweiser, Stella Artois and Corona, grew by 8.0% globally, and by 11.3% outside of their respective home markets, while growing 8.2% in the first half.

EBITDA grew by 9.4% in the quarter, with margin expansion of 123bp to 42% as a result of headline growth, premiumisation and cost discipline. First half EBITDA growth was 8.8%, with EBITDA margin growing by 104bp to 40.9%.

Normalized profit attributable to equity holders of AB InBev in the quarter was US$2.47bn versus just $159m in the same period in 2018, while first half profits was up to $4.99bn from $3.6bn.

Underlying profit (excluding mark-to market gains linked to the hedging of share-based payment programs and the impact of hyperinflation) was $2.3bn in the second quarter compared to 2.18bn last year.

For the full year, it expects to deliver “strong” revenue and EBITDA growth, driven by performance of its brand portfolio and strong commercial plans.

“Our growth model is even more focused on category expansion, targeting a more balanced top-line growth between volume and revenue per hl,” the company stated.

“We expect to deliver revenue per hl growth ahead of inflation based on premiumisation and revenue management initiatives, while keeping costs (sum of CoS plus SG&A) below inflation.”

Sales grew 3.5% in value, with a continued sales/kg improvement, but volumes declined by 1.0% in the quarter.

Reported sales were up 1.3%, including a 1.4% negative impact linked to the sale of Eathbound Farm as well as a minor impact from currencies.

Its dairy & plant-based division posted in the second quarter net sales up 2.2% on a like-for-like basis, including 3.4% increase in value, and a 1.2% decline in volumes. Performance was driven by a stabilisation at global level dairy activities, while plant-based activities continued to deliver consistent strong growth.

A return to growth in early life nutrition helped its specialised nutrition division to accelerate sales growth in the second quarter, with like for like sales up 3.2% up from 0.4% in Q1.

This improvement driven by a 68 bps margin uplift on a like-for-like basis, reflecting headline growth, operational savings from its ‘Protein’ efficiency-program to offset raw materials gross inflation and sales and marketing expenses optimisation as it shifted emphasis towards digital.

Overall, its ‘Protein’ efficiency program delivered an additional €150m of gross savings in the first half of the year.

Danone CEO Emmanuel Faber commented: “Our first-half results demonstrate our continued focus on the combination of strong execution and progress in the transformation of Danone, in order to drive agility and resilience, and deliver consistent profitable growth.

“I was pleased to see top-line accelerating in the second quarter, with growth across all our businesses. The innovation momentum remains strong, while we have addressed most of the underperformers in our portfolio.”

“With unchanged expectations for the full year, I am confident that the improved fundamentals of our business will continue to drive top-line growth acceleration and margin expansion throughout rest of the year.”

Compass Group (CPG) has reported the continuation of weakening volumes in the UK in the third quarter as it remains “mindful of the macro uncertainty in parts of Europe and its impact on the business”.

Overall, the group said it continued to perform well, driven by strong performance in North America.

Compass invested about £100m in the third quarter on bolt-on acquisitions mainly in Europe. It invested £470m in acquisitions in the nine months to 30 June.

The group announced on 11 June it had agreed to buy Fazer Food Services for an enterprise value of about €475m (£424m). The proposed acquisition required EU Commission competition approval, a process which Compass said could take several months

It said it expected to deliver full-year organic revenue growth at the top of its 4-6% range and it expected the group margin to be flat compared with the same period last year.

The group said it remained focussed on delivering efficiencies though its management and performance framework. The margin for the nine months to 30 June was in line with the margin for the same period last year.

Compass’s North American business reported organic revenue growth of 8.5% in the third quarter, or 8.7% excluding Easter, and 8.1% in the nine months to 30 June.

It said it continued to see good levels of new business wins across all sectors as well as significant benefits from a favourable sports and leisure calendar. The margin in the nine months to 30 June was maintained.

It said the deceleration in revenue growth in the third quarter principally reflected the expected lapping of new business from the significant UK defence contracts which mobilised in the second half of 2018.

“We have continued to see weakening volumes in the UK, France and Germany reflecting the more uncertain macro environment and, as a result, the margin for the nine months to 30 June 2019 was down by a similar amount to that reported in H1,” it said.

The Rest of World region delivered organic revenue growth of 3.2%, or up 3.6% excluding Easter, in the third quarter. In the nine months to 30 June organic revenue grew 3.2%. The margin for the nine months to 30 June showed some “good progression” over the comparable period last year as it said it started to see some benefits from pricing and productivity initiatives.

The Monoprix, Cdiscount and Franprix retailer enjoyed faster like-for-like growth in the second quarter of 0.7%, up seven points on the first quarter.

Consolidated trading profit excluding tax credits climbed 12.9% to €347m in the first half – a period during which the group made €60m of cost savings in France.

Second-quarter group net sales climbed 1.1% to just shy of €9bn. On a same-store basis, consolidated net sales rose 2.3%, driven by 3.8% growth in Latin America and an increase of 0.7% in France.

The group is accelerating its debt reduction plan to reach net debt in France of less than €1.5bn by the end of 2020 and main this level over time.

The FTSE 100 reacted to the first day of Prime Minister Boris Johnson by falling back 0.7% to 7,501.5pts as the pound showed some recovery against major currencies.

Risers yesterday included FeverTree (FEVR), which recovered 8% to 2,246p after its share price slump on Tuesday on slowing growth.

B&M European Value Retail (BME) was up 5.1% to 374.3p after posted double-digit first half growth and solid organic growth yesterday.

Also reporting trading updates yesterday were Britvic (BVIC) and PayPoint, which rose 0.6% to 890p and 1.8% to 920p respectively on their results.