The sky's not sunny: how Asda and Sainsbury's merger will end up hurting suppliers 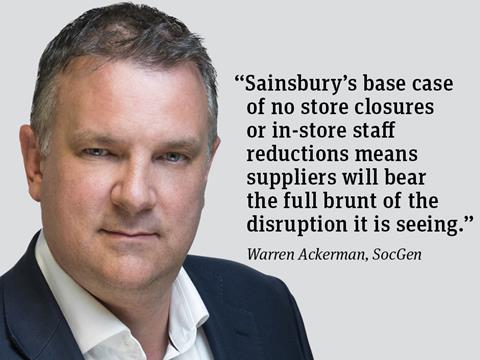 Assuming the Sainsbury’s-Asda merger is not dismantled by the CMA – given it leads to an effective UK grocery duopoly – 70% of the net £500m of synergies promised will be borne by suppliers from harmonising best prices. However, I expect gross savings from suppliers could be an eye-watering £1bn.

Sainsbury’s base case of no store closures or in-store staff reductions means suppliers will bear the full brunt of the disruption Sainsbury’s is seeing. This proposed merger is a defensive response to the Tesco-Booker deal, but more generally reacting to the gains of the hard discounters and perhaps in anticipation of Amazon upping its game.

Sainsbury’s CEO Mike Coupe was caught singing ‘We’re in the money, the sky is sunny’ on ITV News, but we doubt suppliers will feel the same way. The merged company has promised consumers 10% price cuts on top of the ongoing price investments both Sainsbury’s and Asda are currently making – presumably pre-empting one of the CMA’s pressing questions.

Coupe has said suppliers will benefit from growing with a larger business and a streamlined supply chain. This is the carrot, but he is wielding a big stick and suppliers will feel the pain. The comment that big food companies “make spectacular returns and are very, very profitable” is an ominous opening gambit and looks like a clear direction from senior management to buying teams, who will no doubt be competing with each other to keep their jobs. On top of this, with Walmart owning a 42% stake for now, the new company will for now have full access to Walmart’s massive global buying clout, which will make it incredibly tough for suppliers to fight back.

Suppliers are particularly vulnerable in this case because of the different buying policies – ie EDLP vs Hi-Lo. Our bet would be post-merger prices will be harmonised at the ‘Lo’ price , and not EDLP or ‘Hi’. This is what happened when Morrisons bought Safeway in 2003. We expect more of the pain to be felt by the UK-focused brands, such as Dairy Crest and Premier Foods, given more easily comparable products, but own label will not be immune. By contrast, the UK is relatively small for global players like Unilever, P&G and Nestlé; that said their UK operations will be seen as fair game.

If this scenario plays out, we would expect Tesco to respond, but crucially the discounters’ premise is not to be beaten on price, so the risk becomes a race to the bottom on price. We have seen aggressive retailer buying groups in Europe such as AgeCore delisting Nestlé brands, though its CEO Mark Schneider is fighting back, saying: “Now is not the time for one-sided concessions.”.

The upshot for suppliers is when input cost pressures are increasing, and pricing is not an option in this hostile retail environment, margins will inevitably get squeezed, requiring more cost savings to plug the gap – and so the vicious cycle accelerates. The weakest could go to the wall. It could get ugly very quickly and may even prompt more retail consolidation across Europe.