Calais wall 'will just be a sticking plaster' says FTA 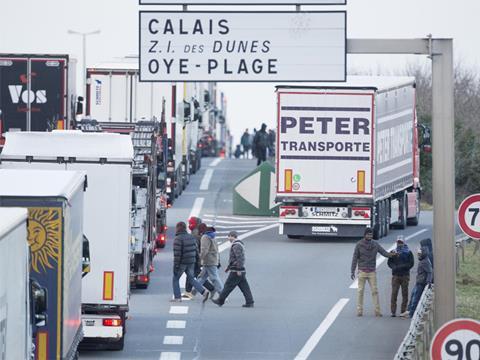 The FTA says the £2m ‘Great Wall of Calais’ will not tackle the root of the migrant problem and has warned drivers remain at risk from violent attacks.

The construction of a 1km-long wall, announced by immigration minister Robert Goodwill, will cost £1.9m and sit alongside the current fence, creating a barrier along the motorway.

The four-metre structure would prevent migrants accessing the road and bolster the breached fence, which currently costs €80,000 a week to repair.

Although the additional security measures would help shield drivers from the recent outbreaks of violence from migrants, the FTA said the government should be dismantling The Jungle camp, which is the root cause of the problem.

“While it’s true the wall will add an extra layer of security, it’s simply a sticking plaster and the migrants will find a way over or round it,” said FTA head of media relations Julie Maddocks.

“The Jungle camp has to go now rather than later, but we have been promised this before so we do not have confidence that the French authorities will deliver. This situation is not going to go away until such time as proper processes are in place to determine who these people are and where they will go.”

The French government has agreed to dismantle the camp by the start of December and put more police trucks on the roads surrounding the port to protect drivers. It has also agreed to weekly meetings involving truck operators, local businesses and the police to update on progress.

The FTA also spoke out against the anti-Jungle blockade protests by lorry drivers and farmers in Calais, preventing vehicles from travelling through main routes into the town and creating a rolling roadblock on the A16 to Boulogne and Dunkirk, causing chaos for supply chains on both sides of the channel.

“We made Mr Sangard aware of the impact of the blockade on both sides of the Channel and the problems it will cause FTA members with scheduling and deliveries,” said FTA EU affairs manager Chris Yarsley.

“FTA doesn’t support this kind of direct action because of the effect it has on members’ businesses and the huge costs involved.”.