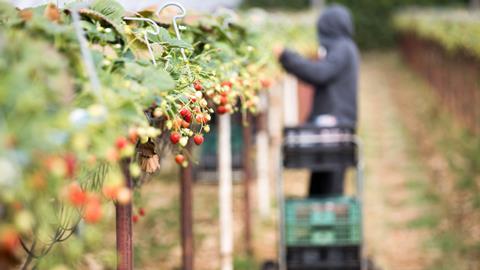 It’s tough to spot even for businesses with strong checks and balances. What’s food & drink to do?

The brutal reality of modern slavery in Britain came to light last week, when eight members of a Polish gang were jailed for a total of over 55 years in what the judge described as “the largest conspiracy of its type ever known”. The gang had trafficked up to 400 people to the West Midlands, forcing them to live in squalid conditions and work for a pittance at sites including farms supplying major supermarkets, it emerged.

Hitting the headlines just days before the government launched a consultation on plans to strengthen reporting requirements under the Modern Slavery Act, the case was a timely reminder of why the food industry should be taking this issue very seriously indeed. So what is the government proposing? And will tougher transparency rules really help tackle hidden exploitation?

Modern slavery is more prevalent in Britain than most consumers - and many businesses - realise, warns Marc Stanton, director of the Slave-Free Alliance, a not-for-profit membership scheme run by charity Hope for Justice. “No one knows the true number of UK victims - estimates range from 13,000, according to a five-year-old government study, up to 136,000 according to a recent academic study. We agree with the National Crime Agency that the number is at least in the tens of thousands,” he says.

Slavery in the UK

It also introduced a requirement for businesses with a turnover of more than £36m to publish public statements on what they are doing to prevent forced labour in their operations and supply chains.

The legislation has “definitely helped” address the issue of modern slavery in Britain, says Stanton. However, while supermarkets are on the whole “acting well above the requirements in the Act”, the response from suppliers has been more mixed. “Some have risen to the challenge whilst others have taken minimal steps to address the risks,” says Stanton. “The farming industry is high risk and could generally do more to reduce it.”

The BRC, which campaigned for the transparency in supply chains clause to be added to the Act, admits it has some flaws in its current form.

“Not every business that is required to make a statement is doing so,” says BRC head of sustainability Peter Andrews, who points out the lack of a central registry of statements makes it difficult to keep track of who is compliant and who isn’t.

“On top of that, companies can simply say they have taken no such action,” he adds.

Public procurement is also outside the scope of the current regulations. “The NHS, for example, is purchasing billions of pounds worth of food and materials but isn’t putting any checks on its supply chain on these things,” says Andrews.

Things are set to change, though. Following a review of the Modern Slavery Act by a cross-party group of MPs last year, the government has announced plans to strengthen the rules. Proposals currently out for consultation include forcing businesses to report on what they are doing in certain areas, as well as removing the ability for businesses to simply state they are taking no action.

The government also wants to introduce a central register of statements and tougher penalties for non-compliance, as well as extending the requirements to government bodies and departments.

The BRC “welcomes most of the proposals”, which it hopes will help “galvanise efforts both at a government and business level to take more and more action on tackling slavery”, says Andrews.

However, tougher transparency measures alone are unlikely to eliminate the problem in the UK, experts agree.

Most British companies with modern slavery in their supply chains and operations aren’t complicit. Rather, they are themselves victims of “serious organised crime”, says Stanton. And the organised criminal groups involved in human trafficking know how to get around anti-slavery policies, he warns.

“They will coach trafficked people on what answers to give if they are questioned by an auditor,” Stanton says. “In some cases the gangs have actually infiltrated businesses including the labour providers. They have even put supervisors into factories or warehouses, which means trafficked labour are always worried because someone is always watching.”

Victims of modern slavery are also notoriously hard to find because they often don’t identify as victims, and many have been conditioned to fear the police and authorities.

It means even companies with stringent anti-slavery policies in place are being targeted. Take fresh produce supplier G’s, which owns Sandfields Farms - one of several farms across the Midlands allegedly targeted by the gang jailed last week.

“It’s going to take lots of working together, lots of training”

“At G’s, including Sandfields Farms, we are committed to working to the highest ethical standards and only work with fully accredited labour providers who work to the highest GLAA industry standards,” says Beverly Dixon, G’s Group HR director. “We will thoroughly investigate any alleged potential breach of these exacting standards and will cooperate fully with the relevant authorities as appropriate.”

Over recent years, G’s has invested heavily in ethical awareness training and monitoring, she says, and it embeds a “culture of open communication across its sites”. It has established an anonymous hotline and employee committees, while all agency workers are surveyed to detect indicators, and line leaders are trained to spot signs of exploitation.

It shows just how challenging it is for individual businesses to stamp out the risk of slavery in their supply chains.

Further progress in this area will therefore depend on more collaboration between businesses, authorities and NGOs, experts agree. “There is no silver bullet, it’s going to take lots of working together, lots of training, empowering workers,” says Andrews. “We are not there yet, we’ve got a really long way to go.”