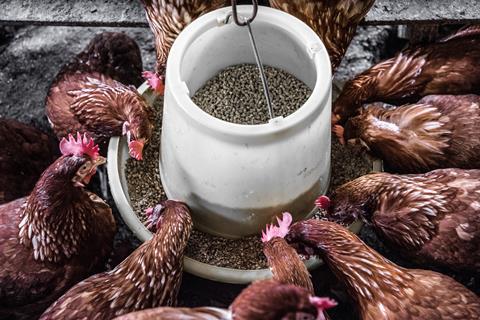 The number of chickens slaughtered for food in the UK has grown steadily over the past 10 years – the figure currently stands at just over 100 million a month, according to Defra. According to the British Poultry Council, on average, people in the UK eat 35kg of poultrymeat per year. Chicken’s popularity has been put down to a combination of consumers wanting to cut down on red meat consumption in order to protect the environment from deforestation linked with beef production, along with it being a relatively inexpensive meat.

But chicken consumption is contributing to the destruction of tropical forests and natural ecosystems. Poultry are fed on soy, which is the second biggest driver of tropical deforestation and ecosystem conversion behind beef. More than three-quarters of it is used for animal feed, with Britain’s annual demand requiring around 1.4 million hectares of land from places such as Brazil’s Cerrado.

Too many food manufacturers and retailers don’t have a thorough enough understanding of their supply chain to tackle this. Many rely on certification, which although a good starting point, is not sufficient to drive change alone. The end goal, (featured in The Grocer last August) is for food businesses to get their suppliers to use soy from non-deforested and non-converted areas, while also using alternative and home-grown proteins. This is the aim for many French retailers, including Lidl in France, who we are supporting in making their supply more transparent. But there are steps food businesses need to take before they get to this stage.

You cannot change what you do not know, you need to gain an understanding of the supply chain. Where does your soy come from and what are the issues? Who are the key players in your supply chains and how can you influence a global positive change? The answers will help businesses prioritise what needs the most attention. The added benefit of such work is that change can come through strong co-operation with each section of the supply chain.

But even before that, there is a need to be clear on what businesses want to achieve in their own words, in their own policy. You cannot implement anything in the field effectively without this. For example, a company might decide it doesn’t want soy coming from deforested or converted areas in it supply chain. It can add to this by going public with a cut-off date for doing so. For retailers, this can include mobilising their own brand suppliers of poultry, beef, pork and dairy to include a no deforestation, non-conversion clause in their contracts. This sends out a signal of intent throughout the supply chain, providing the trigger for change.

Next, they can engage with importers and feed manufacturers, with the goal of assessing their policies and actions to tackle deforestation and supporting them to put a system in place to better do so. It’s about preventing supply chain complexity and making soy a responsible commodity not associated with deforestation.

Not every business will be able to trace their soy supply back to its source. Soy from different farms goes to mills, where it is crushed together and therefore very difficult to trace. The solution is getting direct suppliers to commit to transparency with their own suppliers. They too can formulate their own no-deforestation policies, further strengthening the disconnection between soy and forest clearance. If done well, this can cause a cascade effect whereby all companies involved in the soy processing chain are fully committed to improving practices.

This isn’t theory. In recent months, there’s been unprecedented co-operation among French businesses – with leading poultry group LDC asking suppliers for detailed traceability and the exclusion of soy cultivated on deforested or converted land. Other European countries are beginning to follow suit: businesses not able to adapt and change risk being left behind.