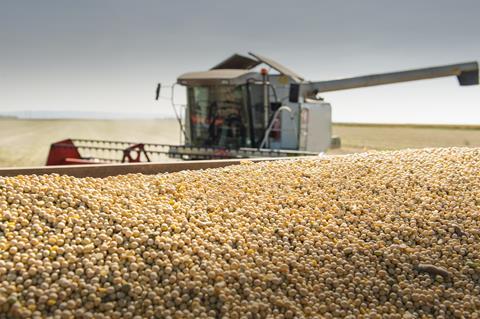 The message from supermarkets to businesses driving deforestation is clear: clean up your businesses or face cut-off from the UK market

The publication of a new industry roadmap this month to stamp out deforestation by the Retail Soy Group – representing European supermarkets including Aldi, Asda, Co-op, Lidl, M&S, Morrisons, Sainsbury’s, Tesco and Waitrose – is a welcome indicator of change. If implemented, it could bring retailers a step closer to delinking meat sales in Europe from forest destruction in South America.

Industrial animal feed for chickens, pigs and cows has caused more deforestation through soy than any other commodity imported into the EU from 2005 to 2017.

The message from supermarkets, representing over £200bn in turnover and nearly 60 million UK customers a year, to businesses that are driving deforestation in South America is clear: clean up your businesses or face cut-off from the UK market within 14 months.

Supermarkets have immense power to influence markets through their sourcing strategy and commercial terms. As gatekeepers of global trade, they can shape production processes to deliver ‘just in time’ convenience for consumers to precise quality standards.

What the roadmap says:

The roadmap represents both an agreement on what good looks like in sourcing policy between retail giants and NGOs but also illustrates progress in several areas – moving away from certification towards concrete action:

This all sounds very promising.

Until now, powerful Brazilian agribusiness companies have refused to accept any conditions in their purchasing of soy from farmers in deforestation hotspots such as the Cerrado – stating they will not accept a moratorium to contain expansion of the agriculture frontier, nor any requirements they consider to be above that of Brazilian law.

With an implementation period of 2023, the new roadmap has the potential to cut off Cargill and Bunge in Brazil from lucrative markets within 14 months if they don’t clean up their businesses.

However, our experience of working in palm oil in Indonesia – where deforestation has plummeted – shows commercial action backed up by robust monitoring remains critical to achieving success.

Three tests that will determine success:

Three main tests will therefore determine to what extent the Retail Soy Roadmap can lead to industry transformation and a similar impact to that seen in palm oil.

2. How will companies handle non-compliance? To be successful, implementers of this agreement need to be crystal clear that non-compliance with the cut-off date, transparency and group-level responsibility principles will result in commercial consequences – such as suspension of contracts or dropping of volumes from companies linked to deforestation. This will be easier to achieve with contractual clauses already in place.

3. Will companies get serious in their investment in alternative proteins to reduce meat consumption? The benefits of consuming less meat for human health, animal welfare, climate change and biodiversity is clear. Any genuine strategy from retailers that aims to end deforestation and conversion in their supply chain must have sensible measures in place to reduce the sales of meat in the first place. This will reduce pressure on land but also spur investment in alternative proteins.

This soy industry roadmap could represent a turning point in attempts to delink soy-driven deforestation from meat sales. However, these three tests will determine whether the roadmap represents a true transformation – or another industry commitment that lacks the teeth to make change happen where it is most needed.