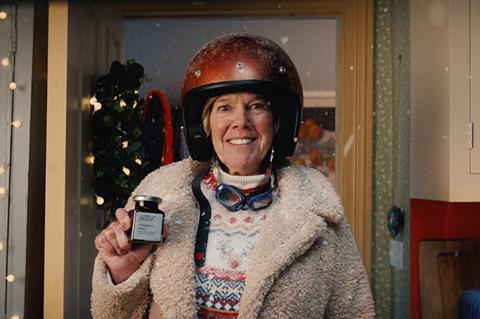 Tesco is steeling itself for a bumper Christmas as it unveiled research alongside its festive ad campaign suggesting 92% of British adults are looking to make the most of Christmas this year.

According to the retailer’s research, 86% of respondents to its survey said nothing would stop them having a joyful Christmas this year, while 42% claimed they would appreciate Christmas more than ever.

With that in mind, the retailer unveiled a Christmas ad, set to the tune of Don’t Stop Me Now by Queen.

The ad was developed by Christine Turner and Kevin Masters of BBH, and directed by Si and Ad from Academy Films, depicting a woman on a mission to get Tesco Finest cranberry sauce to her daughter’s house in time for Christmas dinner.

“We know that Christmas is a hugely important time for many of our customers and, after last year’s events, that is truer now than ever,” said Tesco chief customer officer Alessandra Bellini. “Whenever we set out to create our campaigns, we want to be sure that we capture how the nation really feel and reflect that.

“Our research revealed that people are looking forward to meaningful get-togethers with their loved ones again and given the backdrop of cancelled plans of last year they won’t let anything stop them having a proper celebration this year. This got us thinking about all the little things that have the potential to get in our way – from running out of mince pies to running late to a Christmas party – and the nation’s determined spirit that ensures we’ll overcome them all. We hope our joyful festive ad will resonate and put a smile on people’s faces as we prepare for a season of well-deserved celebrations.”