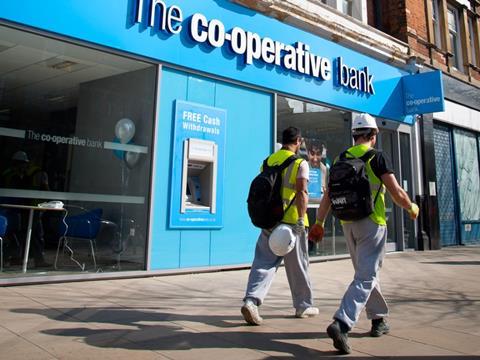 Last December, The Co-op Bank went through a recapitalisation plan that saw investors including US hedge funds Aurelius and Silver Point take a 70% share. In March, the Bank revealed it needed to raise another £400m to cover costs that among others included separating The Co-op Bank from The Co-op Group.

The Co-op Group said last month it would “decide upon participation in this exercise” when The Co-op Bank had finalised the structure of the capital raising.

This morning, The Co-op Group confirmed it would take part. However, it is not putting up the full £400m.

“The Co-op Group notes today’s announcement from The Co-op Bank in relation to its £400m capital raising and confirms its participation, as described in the Bank’s announcement,” it said in a statement.

“While the size of the Group’s shareholding will be reduced following the capital raising, we will retain a significant stake and expect to remain the single largest shareholder. The Group remains supportive of the Bank and its strategy,” the society added.

The Co-op Bank said The Co-op Group had committed “to subscribe for new ordinary shares under the placing and open offer, to be funded by the sale of some of its existing shareholding, and to vote in favour of the capital raising at the general meeting”.

The Co-op Bank also revealed this morning that its chairman Richard Pym would step down by the end of the year. He was appointed chairman in June last year, replacing Paul Flowers who this week was fined £525 at Leeds Magistrates Court for drug possession.

“I would like to take this opportunity on behalf of the board to thank our chairman Richard Pym for his service to the Bank,” said The Co-op Bank CEO Niall Booker.

“Richard has been instrumental in the important governance changes which have been implemented at board level and his relentless appetite to bring about change and improvement has been an inspiration to us all.”

Meanwhile, Ben Reid, the CEO of Midcounties Co-operative Society, has responded to criticism from Lord Paul Myners, who on Wednesday released his final report on his review of corporate governance at The Co-op Group. He was also critical of Reid, who has had a seat on The Co-op Group’s group board since 2000, at a Treasury Select Committee hearing the same day.

Reid told The Guardian: “It’s a shame that the debate has got personal when it’s about something more important than Ben Reid or Paul Myners. We’ve got the agm next week and I look forward to us having a good debate and moving forward.

“I’m not the only one that has been on the board in that time. There are all sorts of implications of what Paul is saying. Why he would target me I don’t know.

“It’s a tragic way to handle what should have been quite a positive thing for the whole of the movement. I don’t know why Paul has chosen to make this adversarial whereas the nature of the [co-operative] beast is to want to discuss things, be collaborative and debate.”