How Co-op's plight extends to its store estate numbers

Directors at war, £2.5bn down the plughole, Paul Flowers squatting in a corner sniffing cocaine. With so many lurid headlines, it’s easy to get distracted from what is happening to The Co-op ’s biggest asset - its property estate.

Not that it provides much comfort right now. Four years ago, with the wind in its sails, the Co-op announced plans for 300 new stores in three years. However, store numbers fell by 88 stores over that period, from 2,849 stores in 2011 to 2,772 in 2014, a 3% decline or 5% in square footage terms. In the process, The Grocery Retail Structure 2014 shows, the Co-op has been overtaken by Premier and pushed into third place.

Worse, the Co-op revealed in April it has a further 645 properties that it does “not need or use” standing empty or being used by another retailer. And the rent doesn’t even cover the Co-op’s cost to maintain them.

The Co-op is trying to fight back by growing its convenience estate. Although it closed 22 c-stores since 2011, it plans to open 100 new stores in 2014, and 150 per year for the next three years, according retail CEO Steve Murrells.

“The strategy is to identify properties between 1,500 sq ft and 3,000 sq ft net sales area on a freehold or leasehold basis, with a focus on London and the South East,” he says. “Our focus is on convenience as we look to highlight our strengths and consolidate our position as number one in the convenience market.”

Co-op director of estates services David Roberts estimates 50 store openings in London with the rest around the UK. “We can see the fragmented convenience market consolidating over the next five years and, in addition to building a strong development pipeline of new stores, we are talking to a number of independent retailers keen to exit their businesses.”

Although the horrorshow 2013 results revealed food sales were hit by the “disposal programme designed to focus on convenience”, it can take comfort from the fact that like-for-like c-store sales rose by 1.6% in Q1 and 5.3% in Q2. And Glenigan economics director Alan Wilen suggests the Co-op is on the right track when it comes to focusing on c-stores.

“The total number of projects entering the system has risen by more than a third over the last two years, while the gross value of these schemes has fallen for two years in a row and is down 44% on 2012,” he says. “A similar trend is evident where the Co-op is awarding contracts for construction work. The number of contracts has doubled over the past two years, but the total value of these projects is down 54%. The message is simple: build more of the smaller, cheaper, stores.”

Wilen suggests the “vagaries of the planning system” will be playing a part in that discrepancy, but also points out that last year saw a “sharp rise” in projects getting the green light. Ultimately, he says, how quickly these projects translate to new store openings “may be impacted by the group’s wider financial travails.”

However, Co-op director of portfolio and development Stuart Hookins says “2013 was very much about building our pipeline of developments, so consequently some of the stores for which we submitted planning applications in 2013 will not have opened until this year. 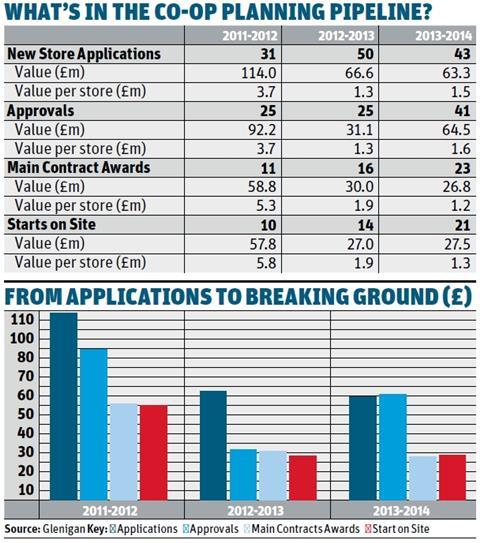