Everyone loves ice cream, right? From Italy to Japan to the beaches of Bognor, the cold stuff is adored world-round. A pop-up museum dedicated to ice cream even opened in New York this August - an idea so popular that 30,000 tickets sold out in just five days.

But with take-home sales down 1.7% year on year, on volumes down 0.9% [Kantar Worldpanel 52 w/e 27 March 2016], apparently Brits are bored of the indulgent treat. Tubs, lollies, cones, chocolate ices and even frozen yoghurt are in decline, with only premium showing growth.

So why are Brits turning their backs on ice cream? And what are brands and retailers doing to revive flagging interest?

It would be easy to blame falling ice cream sales on last year’s erratic summer but Caroline Thompson, senior buyer at Co-op, believes the category has a more fundamental problem.

“There is not much NPD and if the market doesn’t refresh that, it will go into decline”

“There is not much NPD coming out from brands,” she says. “While the market sticks with own-label vanilla, chocolate, sticks, choc ices and water ices, and doesn’t refresh that, it will go into decline because customers do get bored.”

Premium was the only sub-category to buck the decline. Kantar analyst Chris Barron, notes that “continued NPD” tempted half a million new buyers to pick up luxury tubs - with value sales up 3.1% on volumes up 5.1%.

With consumers increasingly aware of the food they eat, they are now looking for something special from every spoonful, says Chow Mezger, joint MD at luxury brand Jude’s. “When people have ice cream they want to treat themselves and when you treat yourself you want to have the best produce, and there are unbelievably premium products out there.”

After launching what it claims was the UK’s first salted caramel ice cream to market in 2010, Jude’s believes it has the next big trend in its arsenal: the Brown Butter Pecan flavour, which launched in May.

“For us, being the first to innovate with new flavours and being at the front end of food trends is the key,” says Mezger.

Finding the latest flavour is not the only way to be innovative in ice cream, and other premium brands are exploring totally different formats in an effort to bring excitement back to Britain’s freezers.

Little Moons has enjoyed great success with its Japanese-inspired mochi ice cream balls - made by pounding steamed rice flour and wrapping it around gelato ice cream. “We launched in Whole Foods in June last year, and within three months the brand had become the bestselling new ice cream brand,” says co-founder Howard Wong.

The mochi balls, which will be in Ocado from 12 September are proving so popular because they offer something genuinely different to the traditional scoop, as well as fitting into the ‘little but better’ philosophy, claims Vivien Wong, co-founder alongside brother Howard.

“In the past people used to eat bigger portions of cheaper product, whereas now people want smaller portions of very high quality, super tasty ice cream, and they don’t want to waste their calories,” she adds. 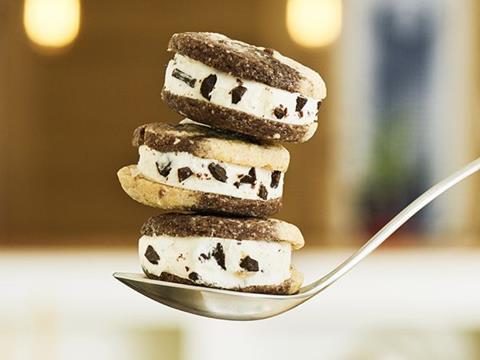 Unilever has also thrown the traditional premium tub format out of the window with the launch of its Ben & Jerry’s ’Wich range - featuring Cookie Dough or Chocolate Fudge Brownie sandwiched between two soft-baked cookies - this January.

“Ben & Jerry’s performed exceptionally well in 2015, growing value sales and its share of this thriving subcategory,” he says. “This has been driven by the way in which the brand continues to innovate.”

Unilever is also hoping to boost sales of its “market-leading” Magnum ice cream with the launch of two new Magnum Doubles flavours this year - chocolate and peanut butter, which has been supported with a £13 million marketing investment including a Magnum Double TVC.

Premier Foods, meanwhile, has looked to the US for inspiration, and recently launched the UK’s first frozen custard. Ambrosia’s Frozen Custard hit UK shelves in February, and initial sales are doing well according to Grace Liljemark, brand director of desserts and baking. “It has brought strong incremental sales to the ice cream category, bringing younger shoppers to the aisle.”

As Brits become increasingly health-conscious, brands are also innovating around health in a bid to encourage people to tuck into more ice cream.

Jersey-based brand Minioti has launched a sugar-free ice trio. “It’s widely acknowledged that it’s not great to have a lot of sugar in products, especially treats that are given to young children,” says co-founder Anna-Liisa Boletta.

Oppo Ice cream, which has also chosen the guilt-free route by taking out sugar and additives, recently won new listings in Holland & Barrett and Budgens.

Growing free-from dairy sales - up 19.6% year on year [Kantar Worldpanel 52 w/e 27 March 2016] - has also inspired a swathe of lactose-free launches.Booja Booja claims sales of its dairy-free ice cream - made from cashew nuts and agave syrup - are up 30% year on year, while Nude Spoon, which uses coconut milk instead of regular milk, hopes to be stocked in the mults soon. “As consumers become increasingly health aware and more conscientious about their food purchases’ environmental impact, the market for alternatives will become more mainstream,” says co-founder Anna Winterbottom.

Despite an increased interest in health, however, chocolate remains the number one flavour in UK ice cream innovation. Over 20% of all new ice cream products launched in the UK over the last 12 months were chocolate flavours, while 13% were caramel or caramelised flavours [Mintel GNPD].

“While health is a booming innovation trend in ice cream, some brands are going the opposite route and ramping up the indulgent factor,” says Alex Beckett, global food and drink analyst at Mintel.

In October, Co-op is set to relaunch its signature vanilla flavour, because despite consumer desire for something different “vanilla is still a great seller”, says Thompson. It might not be the most innovative flavour around, but it seems the old favourite is not confined to the walls of New York’s ice cream museum yet.