The battle for shelf space continues. So we challenged two creative agencies to come up with new concepts that skip the supermarkets and disrupt the way people buy dairy in the UK 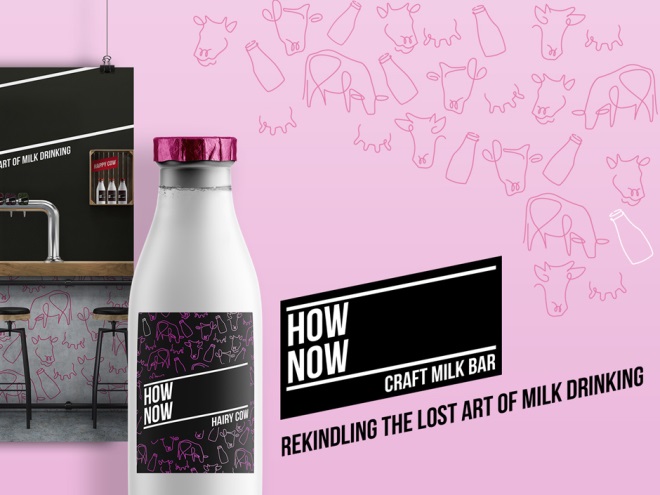 British shoppers could be forgiven for thinking milk all tastes the same. Differences between full-fat, semi-skimmed and skimmed aside, you’d be hard-pressed to find a supermarket pint that tingles the tastebuds in an unusual or surprising way. That’s because the industry has worked hard over the years to standardise production, delivering consistency for the consumer and maximising profitability down the supply chain. Now, though, some brands and suppliers are looking for ways to de-commodify dairy. And experiential marketing agency Sense London has come up with just the way to do it. Craft milk.

“People think milk is a commodity because it ‘all tastes the same’, but that’s only because the industry has standardised its product,” says Vaughan Edmonds, planner at Sense. “Once you start experimenting with the breed of cow, their diet, the terrain, and the climate, milk has just as much subtlety as a fine wine.”

Milk isn’t the only sector where commoditisation has caused problems for brands in the past. “Until recently the beer market was dominated by brands for whom it was demonstrated that consumers couldn’t tell the difference in a blind taste test. It all came down to whose packaging you liked the most,” Edmonds adds.

“But then the craft brewers came along and everything changed. They showed that you could make two beers that didn’t taste alike, and in doing so opened up a whole new world for beer drinkers who could explore a string of new beers without ever getting bored. We want to do the same for milk.”

And just as the craft beer revolution has already seen the number of UK breweries surpass 2,000 - the highest since the 1930s, according to HMRC figures - a similar movement is emerging in dairy, with a growing number of ‘micro-parlours’ cropping up across the British countryside.

Run by entrepreneurial farmers looking to bypass the big processors and get more for their milk, these micro-dairies are experimenting with different production method and breeds, as well as investing in on-site pasteurisation to gain back control over processing and make their milk stand out from the rest. 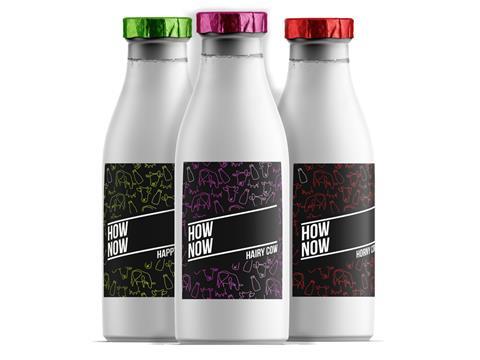 With bold colours and an emphasis on humour, the How Now brand of craft milks is a big departure from the “Sound of Music” image milk traditionally conjures

Our craft dairy brand - How Now - would help fuel this revolution by “showcasing the strengths of different flavours” to “rekindle the lost art of milk drinking”, says Alex Smith, creative strategist at Sense.

“There are so many different types of cows, ways of keeping them and ways of treating the milk,” he adds. “But people have expectations around taste and if you are going to break that expectation you have to make a feature of it. You have to build this sub-category that runs alongside the standard category.”

With bold colours and an emphasis on humour, the How Now brand of craft milks is a big departure from the “Sound of Music” image milk traditionally conjures. “We started by developing an on-trend visual language with hand-drawn illustrations and customised type, packaged under a memorable brand name to get standout in a traditionally bland category,” says Adam Curry, creative director at Sense.

“Our goal was to emphasise the “crafted” nature of the product, partially by displaying certain artisanal cues, and partly by echoing the world of craft beer people are already familiar with. We wanted to turn the category conventions of milk (rolling fields, green on white, etc) on their head.” 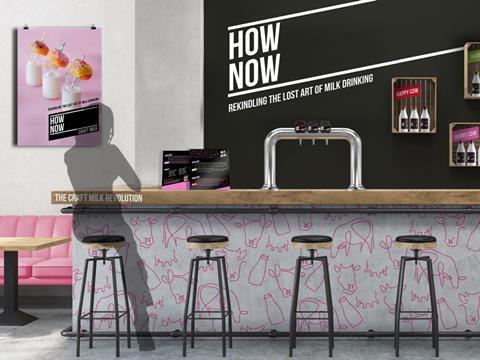 And they won’t be sold in the supermarkets. “If you are going to de-commodify a product it helps to go into the exact opposite place where you expect to see that product,” says Smith. “Dairy and milk are very grocery-oriented products, so the opposite of that would be an out of home scenario.”

With this in mind, How Now would create its own flagship craft milk bar in London “where people can discover the method behind the milk and try the produce of the nation’s micro-parlours,” says Edmonds, who points out the bar format is “a nod to the craft beer industry” that also plays on the fact millennials aren’t big drinkers any more. “It would be similar to something like crush or smoothie bars, which have already got quite good traction in a retail environment.”

Patrons can choose to swig their milk straight up or order it alongside classic accompaniments such as cereal, porridge, cookies or pancakes. They can even add booze, with an evening cocktail menu on offer. “We originally started with cereal pairings, which seemed to make a lot of sense, but we realised the offer could be much broader than that,” says Smith. “Milk isn’t just a breakfast thing - people drink it in the evening with cookies or in a hot chocolate. And it’s also used in things like White Russians so it already has a foot in alcohol.” 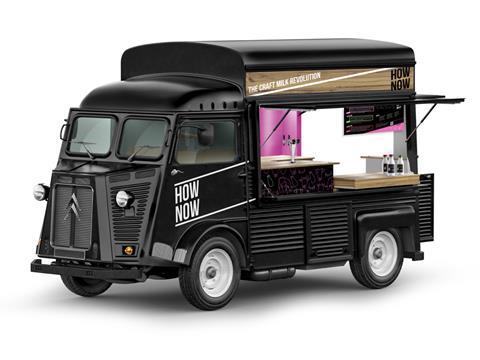 In order to spread the message of its craft milk campaign more widely, How Now would also have pop-ups in the form of milk vans “located tactically to provide the ultimate chilled refreshment to the market and park-goers of the capital,” says Edmonds. Its fleet of vans could even tour music festivals, giving its target audience of trendy millennials a chance to try out the different flavours.

“Our product is very taste-led so it would lend itself well to sampling,” says Smith. “And we acknowledge that - in its early conception at least - this is a somewhat faddish, hipsterish idea. Although too many brands focus on that segment of the market and don’t pay enough attention to the mainstream, this is one idea where it would make sense. Hipsters got craft beer off the ground, so they could pull off the same trick with this.” 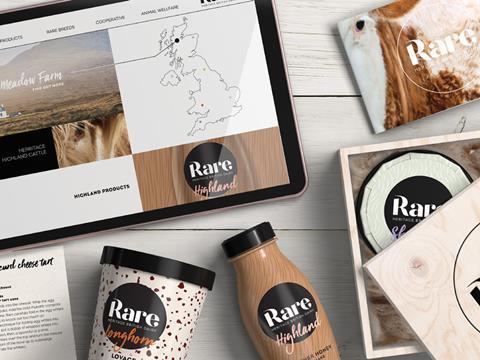 Milk produced by heritage British cattle breeds is some of the best produce Britain has to offer. Carefully bred for centuries, native breeds like the Shorthorn, Ayrshire and Guernsey produce milk with unique characteristics. The Guernsey breed, for example, is renowned for producing a rich, yellow milk that contains 12% more protein, 30% more cream, 33% more vitamin D, 25% more vitamin A and 15% more calcium than average milk.

The import of higher-yielding Friesians and Holsteins from the Continent means some of Britain’s native breeds have come close to dying out. But in recent years, some organic British farmers have started turning back to them. Native cows are hardier than imported breeds and require less additional feed, which means they can be kept outside for longer, improving animal welfare and reducing the risk of illness and the need for antibiotics.

It’s a great story, and one that’s bound to appeal to consumers increasingly interested in the origins and ethics of their food. But it’s not always easy for farmers in far-flung corners of the British Isles to reach a wider audience. So brand design agency PB Creative has come up with a new direct-to-consumer concept to join these farms together under one umbrella and one voice.

“Rare is a range of artisanal dairy products made with the best quality free-range British milk,” says Agata Racka, design director at PB Creative. “We work as a co-operative with carefully selected local farmers that cultivate a centuries-old tradition of keeping British heritage cattle breeds.”

As part of Rare’s mission to “help sustain and preserve Britain’s native breeds”, 5% of every purchase will go to the Rare Breed Survival Trust, whose purpose is to secure the continued existence and viability of the native farm animals of the United Kingdom. “Consumers are losing trust in brands that are just a logo,” says Racka. “They are looking for things that are more sustainable, which they can emotionally engage with.” 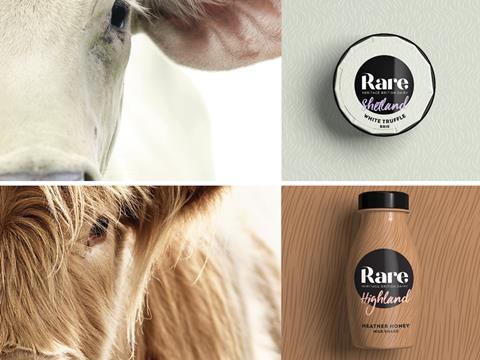 Aimed at the higher end of the market, Rare’s branding is “simple and bold, reflecting both the cow and the milk,”

In addition to being made with free-range milk, Rare’s products are all organic, antibiotic-free, hormone-free and high animal welfare. “It is our guarantee that the businesses and products we promote are the best of British produce and have a positive impact on the cultivation of heritage, local communities and the environment,” she says.

Aimed at the higher end of the market, Rare’s branding is “simple and bold, reflecting both the cow and the milk,” says Racka. The R in its logo, for example, features both a horn and the ear of a cow. “It is quite subtle and sophisticated, but that is what we want to be,” she adds.

Rare’s lineup of artisanal products is equally sophisticated, encompassing milk curd from Longhorn cattle flavoured with lovage, heather honey-flavoured milkshake from Highland cattle and even a white truffle-infused brie made from Shetland milk to “inspire, surprise and indulge” shoppers.

“We tried to choose interesting products,” says Racka. “Milk curd is quite a sophisticated product, and lovage is a hip flavour. Milkshakes are quite cool at the moment and ours is flavoured with heather honey. So it’s all connected to where the cows are from and it gives consumers the opportunity to try something they might not have tried before, which adds another layer of interest.” 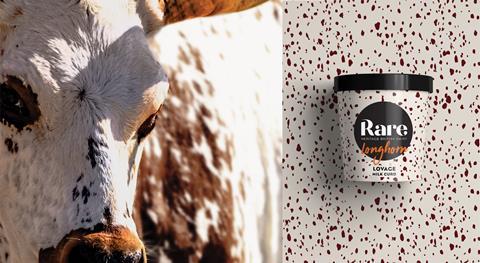 Each product is beautifully encased in packaging carefully designed to reflect the breed of cow that supplied the milk. “Rare breeds aren’t just great in terms of the milk they produce, they also have some interesting looks,” says Racka. “That is where the inspiration for our graphics came from. The different packaging reflects the different patterning of the cows.”

In order to connect directly with consumers across the country, Rare has a dedicated website featuring a map of the co-operative farms, information on each of the heritage breeds they keep, and the full list of artisanal products available.

If they want to order online, shoppers can hand-pick the products they want, or buy a specially curated box of 10 products from different regions to get “a taste of the exciting world of Rare British dairy,” says Racka. 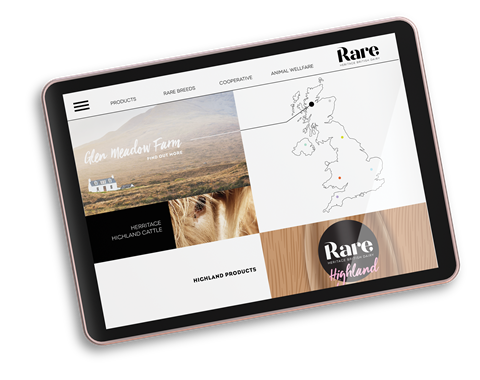 Deliveries will be made direct to the doorstep in an “innovative chill box” created in collaboration with the UK’s pioneering pure wool packaging producers. “There are British producers already making cool boxes using real wool so it is all very pure and environmentally friendly,” says Racka. “It’s using nature in a very modern and contemporary way.”

In order to spread the word about Britain’s heritage breeds, each Rare delivery box will contain a booklet showcasing the farms where the products are made, with a history of the breeds involved and an explanation of how the purchase makes a difference for the future of native farm animals in the UK.

It will also contain recipe ideas for each of the products to give shoppers inspiration to get back in the kitchen. “People are starting to get more interested in cooking, which is why things like Hello Fresh are becoming more popular,” she adds. “But not everybody knows how to cook and we wanted to give inspiration for what to do with our products, so they can enjoy them more.” 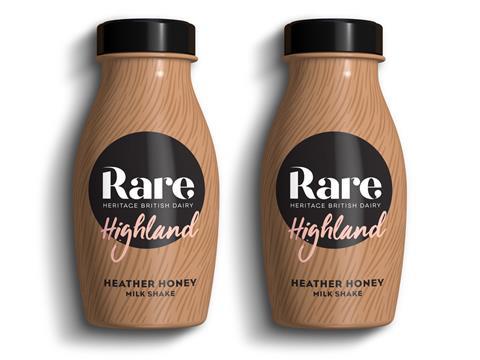 If shoppers want to learn more about heritage breeds and “how sustainable and ethical farming influences the quality of food and the positive effect on your health and wellbeing” they are also welcome to visit any of the co-operative farms and buy directly. “Nothing is hidden, consumers can go to the farm to meet the cows and talk to the farmers and see how everything is produced,” Racka adds. “We think that contributes to the story in terms of transparency.”