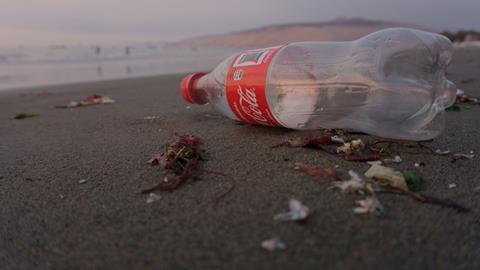 A plastic switch isn’t simple, but Coke is ideally placed to find a solution

It’s enough to make David Attenborough scream. This week, Coca-Cola’s head of sustainability said the supplier would not move out of single-use plastic bottles for fear of alienating shoppers. “Customers like them because they reseal and are lightweight,” Bea Perez told the World Economic Forum in Davos.

Never mind the deluge of plastic entering the oceans every year, or that single-use plastics have been found to accelerate climate change. According to the world’s biggest soft drinks maker, people still want plastic. “Businesses won’t be in business if we don’t accommodate consumers,” insisted Perez.

More than two years after Blue Planet II sparked a wave of anti-plastic outcry and innovation, Perez’s comments are a little tone deaf. Considering the growing understanding of the detrimental impact plastic pollution has on the planet, refusing outright to ditch the material in the name of customer satisfaction is not a good look.

It’s not like Coke can’t afford to splash out on sustainable packaging. Nielsen data shows sales of its core brand hit £1.3bn in the UK alone this year – more than double the value of its closest competitor, Pepsi.

And the supplier is well aware of its significant contribution to the plastic scourge. In March 2019, it admitted to having produced about 200,000 bottles a minute in 2017. That number can only have grown considering the raft of plastic-packed innovation since, as Coke aims to become a ‘total beverage’ maker with the likes of Honest, Fuze and Adez.

An equally chilling depiction of Coke’s plastic production was provided last October by campaigning charity Break Free From Plastic, which claimed the US leviathan was the world’s single biggest contributor of plastic waste.

Not that Atlanta is ignoring the issue. Coke has committed to making its packaging “as sustainable as possible”. It’s encouraging recycling – aiming to recycle as many bottles as it produces by 2030. And it’s playing with such ideas as a marine plastic bottle.

Solutions need to be varied and many. Because a simple switch from plastic to glass and aluminium would increase the brand’s carbon footprint – as Perez pointed out this week.

But solutions need to go further. After all, recycled plastic and marine plastic are still plastic, and can still end up in landfill or waterway. Coke is in a superior position not to pander to consumers but to steer them towards greener behaviour. It has the influence, ingenuity and money to help cola fans realise their plastic bottles do more harm than good. To encourage them towards some or other planet-friendlier format. Because, in this instance, the customer is not always right.