The Co-operative Group has been in and out of the headlines for more than a year – mostly for all the wrong reasons.

But this morning, The Co-op’s food arm took centre stage when it invited the media to its pilot Generation Two store in Shoreditch, East London.

While the society’s banking arm has lurched from crisis to crisis, and plans were revealed last week to sell off its farming arm and possibly its pharmacy chain , the food business has been working behind the scenes on its ‘True North’ strategy to become the leading convenience retailer in the UK.

Head of retail Steve Murrells revealed his plans to The Grocer last summer, and this morning he reiterated that before embarking on True North prices had been too high, ranges were confused, shops were tired, availability was patchy, own-label lines were poor and its larger stores were under pressure.

To fix that, The Co-op has been working on six strands: carefully chosen products; fair and compelling value; simple consistent delivery; served with character and connection; distinctive community connection; and truly convenient experience. And the strategy is starting to pay off: like-for-likes in its c-stores rose nearly 4% in the past four weeks.

After piloting Generation One stores with a greater focus on fresh produce, this year The Co-op is piloting Generation Two stores. It currently has 17 being tested based on three formats that reflect shopper missions: top-up, shop for today, and food to go. 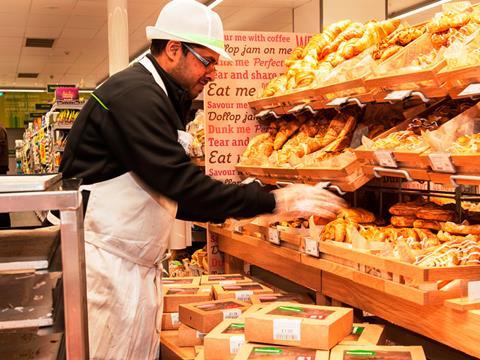 The society’s 5,000 sq ft Shoreditch store is a top-up pilot. Throwing out the rule book for convenience store layouts, The Co-op has concentrated on how shoppers shop the store, effectively creating three zones.

At the very front of the store is ‘food for now’ – categories like food to go, newspapers and magazines, bakery and flowers – so shoppers on those missions can shop “as conveniently as possible”. For those with more time on their hands, there’s also a coffee machine, seating area and free Wi-Fi.

Further into the store is the ‘food for tonight’ zone, which includes fruit & veg, meat , beers , wines and spirits, pasta etc. Cross-merchandising features heavily in this zone, with, for example, the pasta and sauces right next to the fruit & veg, and olives and dips next to cheeses and sliced meats.

‘Perfect partners’ PoS also suggests products that work well together, and if shoppers are totally stuck for ideas, there’s an ‘inspiration table’ at the front of the store with the complete ingredients to make meatballs and spaghetti (with suggested wines and beers, too).

At the back of the store is ‘food for later’ – store cupboard essentials, ambient lines and frozen .

It goes without saying that convenience is key for the store. There are Amazon Lockers, which Co-op food trading director Michael Fletcher says are being filled three times a day and are proving very popular. All beer , wines and spirits that “can and should” be chilled are stocked in chillers. A bank of seven self-service tills has been installed, and window graphics have been removed so shoppers can see right in and to the back of the shop.

Fletcher says the store, which was refurbished in late January, is currently turning over around £172,000 a week and last week hit £180,000. Like-for-likes – as in all Generation Two stores so far – are in double-digit growth.

The retailer is planning to roll out more Generation Two stores this year and also plans to refurb 1,000 c-stores. Shoreditch certainly has a very different look and feel to the average Co-op. The concept won’t work in all locations, but with three formats to play with, new own-label lines coming in and the promise of better availability and lower pricing, the society could have a winning concept on its hands.

Murrells told journalists yesterday that “for the past 50 years The Co-op Group has had coronary heart disease, and last year had a heart attack”. Now is the time for The Co-op to put its troubles behind it and prove it is on the road to recovery.