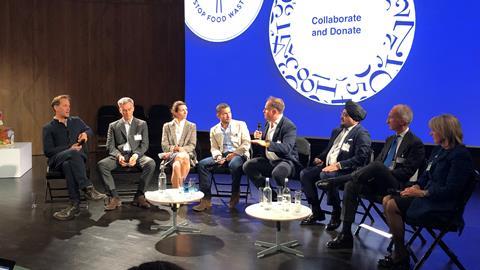 The plastics problem has had a lot of attention lately, and rightly so. Lower on the public agenda has been food waste.

And so kudos goes to food waste tsar Ben Elliot and environment minister Michael Gove for gathering together a crowd of industry members, NGOs and MPs at an event yesterday to get the issue back on the table.

There, in the imposing setting of the V&A, the pair announced a series of initiatives designed to accelerate the fight against food waste – a blight which still costs the UK £20bn per year and pumps out far more greenhouse gas than the plastic that leaves people so incensed. Those initiatives include a new national awareness week, league tables that rank company performance by their progress on waste and a commitment by 300 food and drink companies to halve waste by 2030. In other words, good concrete steps to accelerate our progress toward the UN Sustainability Development Goal 12.3.

The event also followed last week’s announcement of the first four organisations set to benefit from a new Defra pilot fund of £15m to boost redistribution rates, a fund which The Grocer campaigned for alongside FareShare UK as part of its Waste Not Want Not campaign.

There was some big talk from Gove, too. “Everything about the way our food has been produced suggests a degree of extravagance,” he said to attendees. “But perhaps even heedlessness about the consequences of our generation of abundance.”

MP Thérèse Coffey joined too. Last time I saw her, she was the keynote speaker at a water conference and gave a stern and serious speech, but not here. Instead she provided some comedic value, donning a “sexy” apron to chair one of the panel discussions.

In other words, it was a good show from government, one that ticked all the boxes. But did it go far enough?

Don’t get me wrong, I agree with a lot of the points made at the event. Food waste is a huge issue. Businesses and individuals have a duty to do something about it. We aren’t doing enough on it because it is not seen as a social faux pas – I admit that even after attending the event, I still scraped the leftovers from dinner that night into the kitchen bin.

But I’m inclined to agree with Tesco CEO Dave Lewis when he says this new food waste strategy doesn’t go far enough. In particular, he has called for all UK food companies to publish their food waste data within the next 12 months – a commitment to transparency he wants included in the pledge, alongside the voluntary agreement reached by UK grocers via IGD last year.

Many attendees appeared to agree. When asked what they wanted from government, they replied with things like: looking again at redistribution of food surplus to livestock, tax breaks for companies which donate waste food to charity, free data on productivity and waste from farm to supermarket. Food critic Giles Coren even went as far as to say he wants an outright ban on all food advertising.

Dramatic asks, yes. But let’s be honest, it’s going to take far more than government posturing and a few hundred pledges to really change things. What waste really needs is its own David Attenborough moment to bring about meaningful, universal change. And on that front, perhaps the vaguely elitist setting of the V&A isn’t the best place to start…