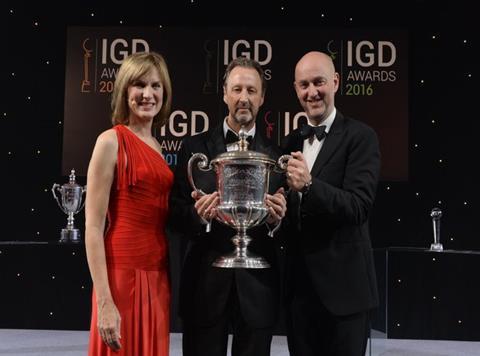 The Co-op’s chief executive of retail Steve Murrells has won The Grocer Cup 2016.

Murrells enters the grocery industry’s ‘Hall of Fame’ after four hectic years during which he steered the turnaround of the Co-op food business.

He received his award in front of hundreds of industry guests at the IGD Awards Dinner at Westminster’s Park Plaza Hotel last night.

“I’m honoured as it was a high calibre shortlist and delighted that members of the retail industry voted for me,” said Murrells.

The prize was awarded by readers of The Grocer, who voted for a shortlist of 10 senior industry leaders including Tesco CEO Dave Lewis, Aldi UK CEO Matthew Barnes, and former Lidl UK MD Ronny Gottschlich.

The cup is awarded to the individual who has contributed most to the industry over the past year and shown exceptional leadership in inspiring his or her company to achieve exceptional results in the preceding year.

The Grocer Cup was one of three awards that went to the Co-op following its rebranding with a new logo and fascia design, resetting of its own-brand offer and relaunch of its membership proposition under Murrells and group chief executive Richard Pennycook.

Its other awards were the IGD Food-to-Go Operator of the Year Award and the IGD John Sainsbury Award for Training and Development for its ‘service rocks’ learning and development initiative.

“The Co-op’s food business has transformed itself over the last three years and the awards are recognition of the hard work and dedication of our colleagues in turning the business around,” Murrells added.

“We are the fastest-growing non-discounter in the UK and the most frequently visited store. We’ve brought back the famous Co-op cloverleaf brand, reinvented our membership proposition, reinvigorated our stores and the quality of our own-brand food really is Irresistible, as its name suggests.”

About 500 leading figures from the world of food and grocery gathered at the awards hosted by journalist and broadcaster Fiona Bruce.

The gongs celebrated the industry’s outstanding achievements and were selected by judges from across the food and grocery supply chain.

“We are living through times of great change, yet the resilience and determination of our world-class industry to turn this change into opportunity never fails to impress,” said IGD chief executive Joanne Denney-Finch.

“Whatever the circumstances, food and grocery companies continue to surprise and delight shoppers with fresh ideas and great service. I am always impressed by the variety and quality of the submissions we receive and the bar has been set just as high this year. I would like to congratulate all those who entered.”

Winners of the IGD Awards

• 24 from Compass - IGD Innovative Store of the Year Award

• Steve Murrells from the Co-op - The Grocer Cup