Tesco crowned Grocer of the Year at Gold Awards

The gold standard: click or tap on this link for write up and reports of all this year’s Gold Awards winners 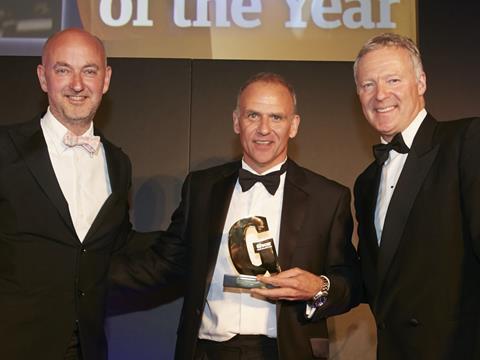 The “Herculean” turnaround of Tesco saw it crowned Grocer of the Year at The Grocer Gold Awards last night, beating high flying discounters Aldi and Lidl, a resurgent Iceland, and Morrisons, which has also made a strong recovery, in the closest contest for years.

Tesco’s award capped a dazzling evening at the magnificent Guildhall in London, hosted by comedian and impressionist Rory Bremner in front of a sellout audience. And of the many tough decisions the judges had to make in deciding the 27 winners, “this was probably the toughest”, said Adam Leyland, editor of The Grocer.

“In the 10 years I have judged this award I have never known such tense deliberations. A deserving case could be made for every supermarket on the shortlist and it was an agonising decision. But in the end the case for Tesco won through. It has been a turnaround of incredible complexity, addressing numerous issues, and played out against the backdrop of a Serious Fraud Office investigation. And yet it has been convincingly reengineered from the ground up, its store standards have vastly improved despite slashing costs, and it has made incredible strides to restore its battered reputation.

“Tesco will be the first to say there is more work to be done, but to get Tesco firing again has taken a Herculean effort from everyone involved at the supermarket, from the boardroom to the shop floor. This award is thoroughly well deserved.”

As further evidence of its turnaround Tesco was judged Britain’s Favourite Supermarket for the third consecutive year. The only award voted for by consumers, Tesco came top in seven of the 10 criteria on which the survey is based, including availability, promotions and – for the first time - provenance. It also won the Waste Not Want Not award – newly introduced this year as part of The Grocer’s campaign to tackle food waste, for its leadership on this key issue, and its use of new technology to massively increase food waste redistribution from its stores.

Other supermarkets didn’t leave empty handed however. Iceland was voted Online Supermarket of the Year for the first time, and its £2m new development kitchen won Business Initiative of the Year. CEO Malcolm Walker said: “I am immensely grateful to The Grocer for the further endorsement provided by these great Awards.”

Minister for Trade Policy, Lord Price, said: “These awards are real proof of our home-grown talent for producing world-leading food and drink. The exporting success of British brands such as Eat Natural shows the high demand for our goods and services from all over the world and the opportunities for businesses to trade internationally.

“As we look towards our future outside of the EU, the Department for International Trade as an international economic department is creating a global trading framework which will allow us to be more outward-looking than ever before and build on our proud history as a great, global trading nation.”

It was also a great night for Sainsbury’s. Redhill store manager Dave Curness beat off strong competition to be crowned Store Manager of the Year. And Sainsbury’s also won Gold for Service and Availability – in both cases for the fifth year running.

For Aldi the evening proved a double celebration, as a group of the company’s managing directors started the National Three Peaks Challenge within 24 hours of winning the Employer of the Year award – and took the trophy with them from the awards night. The initiative was part of Aldi’s fundraising for its charity partner The Teenage Cancer Trust and has raised over £8,000 so far.

On the supplier side, among the most keenly contested categories was the SME Brand of the Year, with The Collective scooping the prize.

Fever Tree capped off another extraordinary year for the premium mixer pioneer, which has seen its market cap soar to almost £2bn, by winning Brand of the Year.

And the award for Exporter of the Year, presented by Mark Price, the former Waitrose MD, in his capacity as minister of state at the Department of International Trade, was won by Eat Natural.

The Grocer Gold winners of 2017

Brand of the Year

Branded Supplier of the Year

Business Initiative of the Year

Consumer Initiative of the Year

Drinks Retailer of the Year

Employer of the Year

Entrepreneur of the Year

Exporter of the Year

Food to Go Retailer of the Year

Green Initiative of the Year

Independent Retail Chain of the Year

Logistics Supplier of the Year

Online Supermarket of the Year

Own Label Range of the Year

Own Label Supplier of the Year

SME Brand of the Year

Specialist Online Retailer of the Year

Store Manager of the Year

Symbol/Franchise Convenience Retailer of the Year

Technology Supplier of the Year

The Grocer of the Year

Waste Not Want Not Award

Wholesaler of the Year